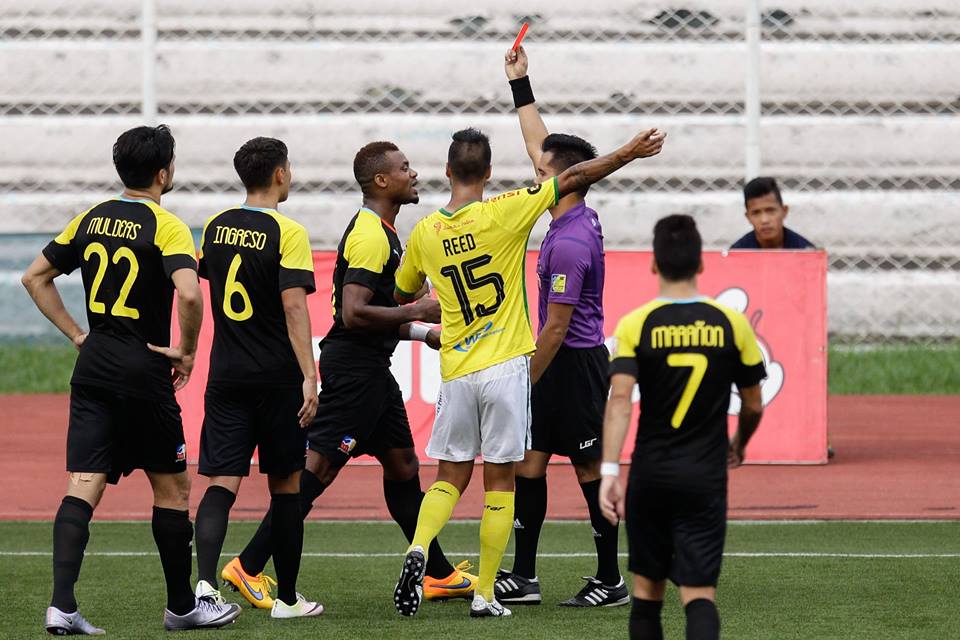 Ceres had the best chance in the early going when Stephan Schröck released Kevin Ingresso with a lovely backheel in the 10th minute. Ingresso had space on the left but his shot hit the side netting.

Things went bad for Ceres in the 13th minute when centerback Valentine Kama was given a straight red after an off-the-ball incident with Jovin Bedic. The sending off allowed Kaya some opportunities but the ten-man Ceres squad kept in step. Bienvenido Marañon had a good chance in the 18th minute after breaking away and setting up a one on one with Acton. The Spanish player however foiled his chance with his attempted chip as it was too low leaving Acton to collect.

Jovin Bedic had his chance in the 21st but his chance was way over. Kaya FC’s Shirmar Felongco was adjudged a red card 40th minute after hitting Bienvenido Marañon in the face which leveled both teams to ten men. The half ended still scoreless with no team getting the upper hand.

Ceres pushed the action in the second half gaining chances against a Kaya defense who sat back looking for counter attacks. Kaya substitute Robert Lopez-Mendy had a good chance in the 77th when a breakaway allowed him to get a dangerous shot on goal but Sacapano played it well doing a one-hand save to disrupt the upstarts. It wasn’t until late in the half when Ceres got some chances in. Shrocks chance in the 83rd met the post with his follow up going out wide.

It was Kaya who got the upper hand in extra time when Tanton issued a pass to Adam Reed inside the box which Reed provided a heavy touch back to Tanton who tested a left footed shot towards goal. The ball was partially blocked by Sacapano but it had enough english to drift into the far post and in giving Kaya the winner in injury time.

With the win, Kaya maintained their fifth place in the standings but it cemented Ceres in the second spot which will allow Loyola to take advantage with a game at hand. The loss had shut Ceres’ title aspirations giving Global a si point differential with a game in hand. That leaves Ceres to battle with Loyola and JP Voltes, teams they have yet to face in the second round, for the coveted second spot that provides the holder an AFC Cup spot should Global win the title. Ceres plays Loyola on September 24 which makes it one of the deciding games for the second spot.