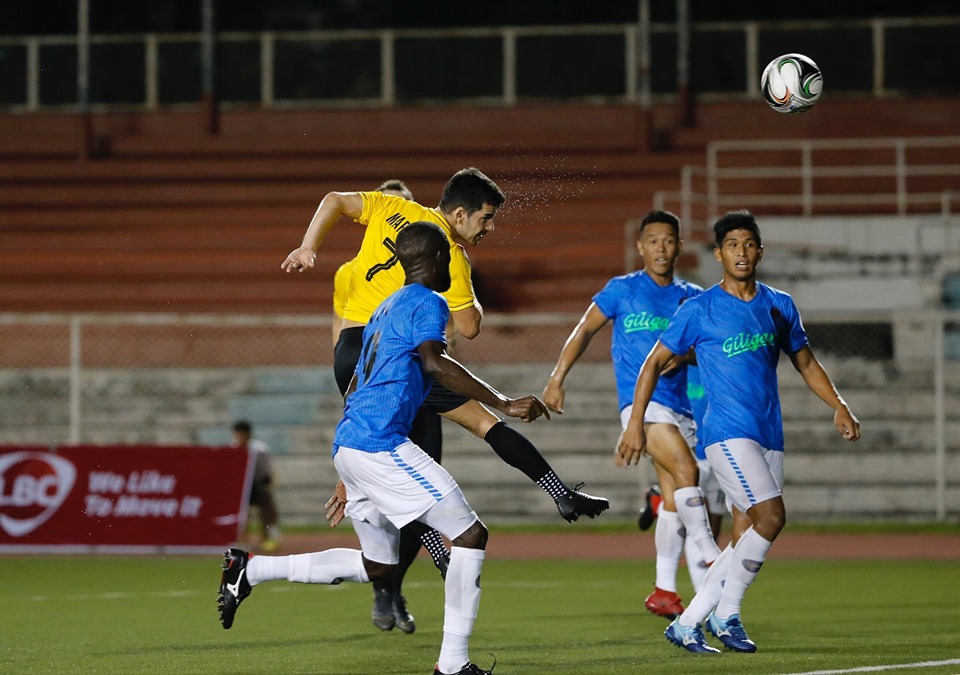 Ceres-Negros FC forced a 2-2 draw against a resurgent Stallion Laguna last May 25 at the Rizal Memorial Stadium in Manila. The busmen came back twice to salvage a point against a motivated Laguna squad.

The away squad broke the ice in the fifth minute when Abou Mohammed Sy intercepted a weak back pass from Bienvenido Marañon before he raced past the defense to guide the ball past Roland Muller.

The Busmen had their first chance in the 12th minute when Stephan Schrock tried to pick out Patrick Deyto but the keeper did well for the save. Jess Melliza also tried from distance minutes later but the ball bounced straight to Muller.

Ceres-Negros had twin chances from Mike Ott and Mahir Karic but both were off target. Stallion had two of their own midway the first half but Abou’s header went over and Melliza’s shot went straight to Muller.

The Busmen equalized in the 25th minute when Martin Steuble’s ball surprised the keeper and found the top corner to make it 1-1. Celebrations were short lived three minutes later when an errant back pass by Carli De Murga missed Muller who was slightly forward. Muller tried to recover the pass but his last ditch attempt was too late.

About had another chance past the half-hour mark but Jeffrey Christaens did well to block the attempt. Maranon had the best chance to equalize just before the break but his header was tapped out by Deyto. The half finished with Stallion leading 2-1 over Ceres.

The visitors had the first chance at the restart when Joshua Kim’s dangerous cross was punched out by Muller. Ceres came close minutes later when Schrock crossed to Karic but the striker missed the header.

The Negros squad earned the equalizer in the 53rd minute when Schrock delivered a lovely ball to Maranon who headed the ball beautifully to the back of the net.

Stallion had a glorious chance to go ahead three minutes later but substitute Chima Uzoka’s attempt was just inches off the top corner. Schrock tried to sneak in a shot in the 69th but the ball just went wide of the target.

Ceres-Negros owned the possession in the latter minutes but found it difficult to penetrate the resolute Stallion defense. The Laguna squad had their own opportunities against the high Ceres line highlighted by Abou’s point blank chance. Roland Muller however had other ideas to tap the weak shot away.

Muller was called to action again eight minutes from time when dived full stretch to block the shot of Nathan Alquiros who was adjudged the man of the match.

The defending champs had their final chance in the 89th minute after they were awarded a free kick at the edge of the box after a foul on substiture OJ Porteria. Schrock stepped in for the shot but Deyto punched the ball out to safety. The match finished with boat teams splitting the spoils in their opening match.

“I think they (Stallion Laguna) deserved to win today,” said Ceres Coach Risto Vidakovic. “I think we played our worst game this year. We gave them two goals in the beginning and it was really hard (to come back) especially becaus the pitch was too slow.”

“I don’t know if the change from AFC Cup to the league made it too difficult to motivate the players. Maybe we underestimated Stallion today. I think some of the players didn’t give all that they have today.” the Ceres tactician added.

The defending champions will have to recover quickly as they will face Philippine Air Force FC in their second league match at the Rizal Memorial Stadium on Wedenesday, May 25.

All Photos from the Philippines Football League/Mark Cristino