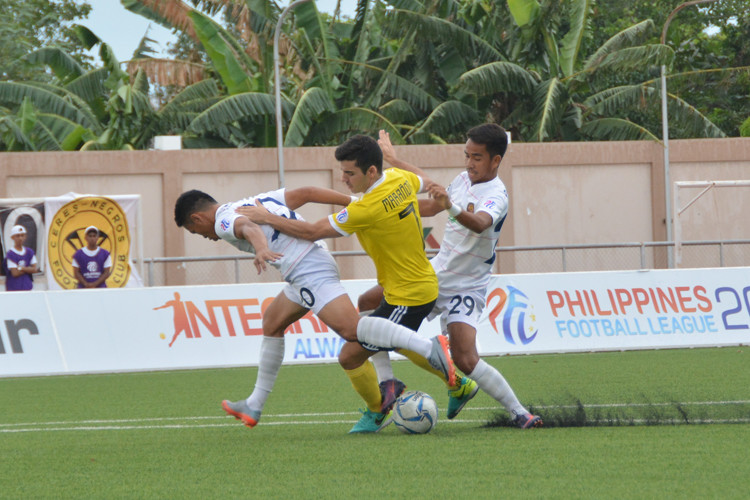 Ceres-Negros FC clawed back from a two goal deficit to win 3-2 over Stallion Laguna FC last May 26 at the Binan Football Stadium.

Stephan Schrock scored a goal while Bienvenido Maranon scored a brace to complete the comeback after two first half goals from Jan Melliza.

Stallion Laguna came into the match prepared very well for the match which saw them take the lead with a 9th minute strike from Melliza.

The striker shot well from outside the box to beat Toni Doblas to the delight of the home fans,

Maranon had a golden chance to equalize in the 18th minute but his shot from inside the box sailed over the crossbar.

The visitors had twin chances near the 24th minute with Schrocks attept collected byy the keeper and Kevin Ingreso’s 25-yard chance sailing over.

Laguna doubled their advantage minutes later on after Melliza pounced on a breakaway to send the home fans to a frenzy. 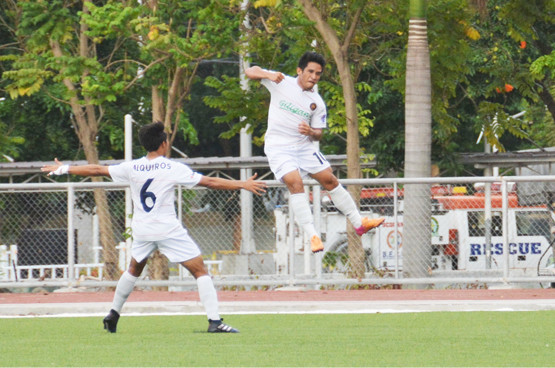 Manny Ott had a good chance to score in the 28th after a well worked team play saw him open inside the box. Stallion meanwhile had other ideas as the defense blocked the danger.

Schrock had another when he tried to recover Takumi Uesato’s deep cross but his acrobatic volley went out for a goal kick.

Both teams would earn some half chances but the halftime whistle blew with the the home squad leading 2-0.

Stallion had the best chance at the start of the second half when Melliza provided a great ball to Nate Alquiros on the breakaway. The winger had acres of space but his hurried shot was wide of the post.

Ceres started to find its groove when substitute Mike Ott cut through the wings and laid off to the middle. The ball landed to Ingreso but the midfielder couldn’t find the target.

The Busmen’s persistence bore fruit in the 55th minute when a lovely ball from Manny Ott found it’s way to a streaking Schrock who heads past the keeper to make it 2-1.

Schrock’s reverse ball towards Mike Ott minutes later allowed the winger to swing the ball quickly to Maranon in the middle. The Spaniard turned well and shot towards the inside off the post for the equalizer.

Laguna almost scored another in the hour mark when a goal line clearance landed in Fitch Arboloda’s lap. The substitute tried from point blank but his shot was blocked to the dismay of the home support.

Ceres-Negros finally had their opportunity to go ahead after Dodong Villareal mistimed his tackle on Maranon to force the referee to point to the spot.

Ceres’ top scorer stepped up for the penalty and casually shot to the right to give his team the advantage.

The Laguna squad tried to get an equalizer in the final minutes but poor finishing and good defense kept them at bay.

Arboleda’s outside the foot volley sailed over the bar while Melliza’s super strike in the 2nd was palmed by Doblas. Arboleda was again dangerous in the 85th but Junior Munoz did well to deflect the effort for a corner.

Stallion centerback Ko Kyung-Joon bulldozed Doblas while chasing for the ball in the final minutes of injury time but the referee only called for a foul without no card given.

“Were so happy that we came from behind and got the win. We’re lucky also that, with the intensity and how the game went, nobody was hurt too much and suffered a serious injury,” said Ceres Assistant Ian Treyes.

The Ceres Coach was relieved that his team cam out of the highly physical match with a few bumps and bruises.

The physicality was highlighted in injury time when Kyo Kyung Joon bulldozed Toni Doblas in the box and escaped only with a foul with no card given.

“We are happy to win this game but I hope that next time they will protect the players, not only our players but also for the other team,” pleaded Treyes.

Man of the Match Bienvenido Maranon knew that the game was not going to be easy because of Stallion’s good performance and with the match being played at 4pm.

They scored two goals in two chances. Then we continued playing like in the first half and we tried to score like always. We’re lucky to score the three goals and we got the win,” said Maranon.

“We said in half time that we have to keep going and try to defeat their defenders. We’ll enjoy this win a little bit and prepare for the next match because its not easy to win here,” he added.

Both teams will face each other again on Wednesday, June 2, at the Binan Football Stadium. The win pushed Ceres to 21 points opening a five point lead over Kaya FC at the top of the table.