League leaders Ceres-Negros FC meets Global Cebu FC for the third time this season on July 20 at the Rizal Memorial Stadium in the City of Manila.

The two rivals will meet for two consecutive matches this month with Ceres gunning to earn points in their quest for their second consecutive PFL title.

Both teams have met twice this season with the Negros outfit winning both matches in the historic stadium.

Ceres-Negros FC scored a hard-earned 2-0 victory last April 18 in Rizal Memorial. Mike Ott and Stephan Schrock scored a goal each in the match to keep the Cebu side at bay.

Their second meeting was also an interesting affair when they withstood home squad’s second half comeback to score a 4-3 win last June 16. 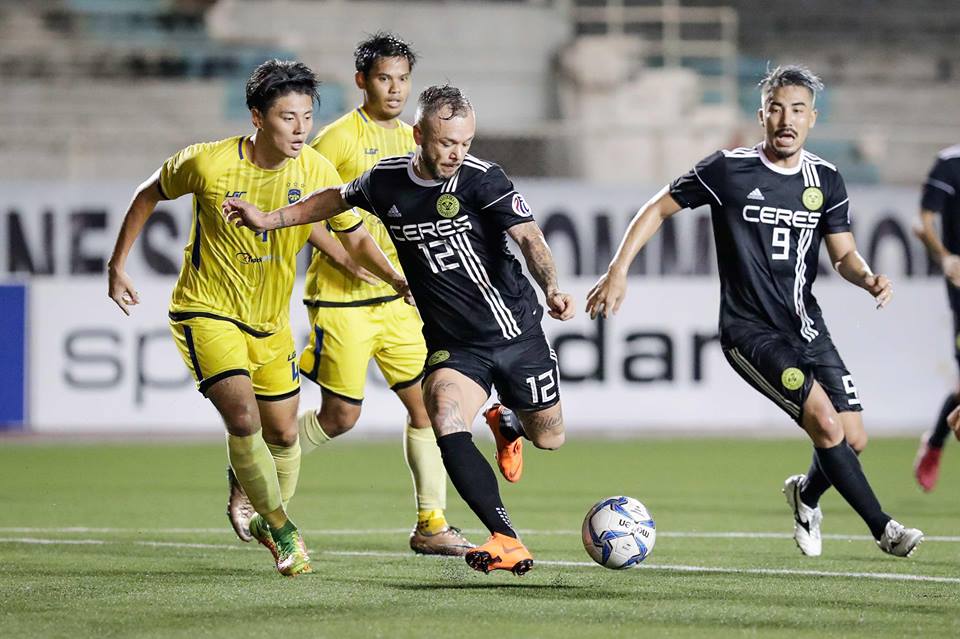 Stephan Schrock and Mike Ott both scored a brace while Darryl Roberts registered a brace of his own with Paolo Salenga scoring the other goal for Global.

Both teams have produced good results in their past matches leading up to the Saturday tiff. Ten-man Ceres-Negros lorded over the Davao Aguilas in Tagum to score a 3-1 result.

“Coming from a victory against Davao, the team had a good break after the last few weeks,” said Ceres Assistant Ian Treyes. “We are focused on our next games against Global. Hopefully we can perform well and get the next two games so we can focus on the AFC Cup,” he added.

A depleted but resilient Global side scored early but conceded late against the Aguilas to go home with a 1-1 draw last Wednesday. Ceres foward Nessi Ramos is well aware of the challenge ahead and is raring to go in the next match.

“We saw how Global drew against Davao the last game and they’re still strong team for me. We’re still focused on the game tomorrow and we have new players it will be a challenge for us,” said the former St. La Salle standout.

Australian striker Blake Powell has also joined the defending PFL champions and will also likely play in their upcoming match. The A-League veteran has featured for clubs such as Sydney FC, Wellington Phoenix, and lately with the Central Coast Mariners.

The league match is set to kickoff at 730pm and will be shown live via PFLtv.ph.