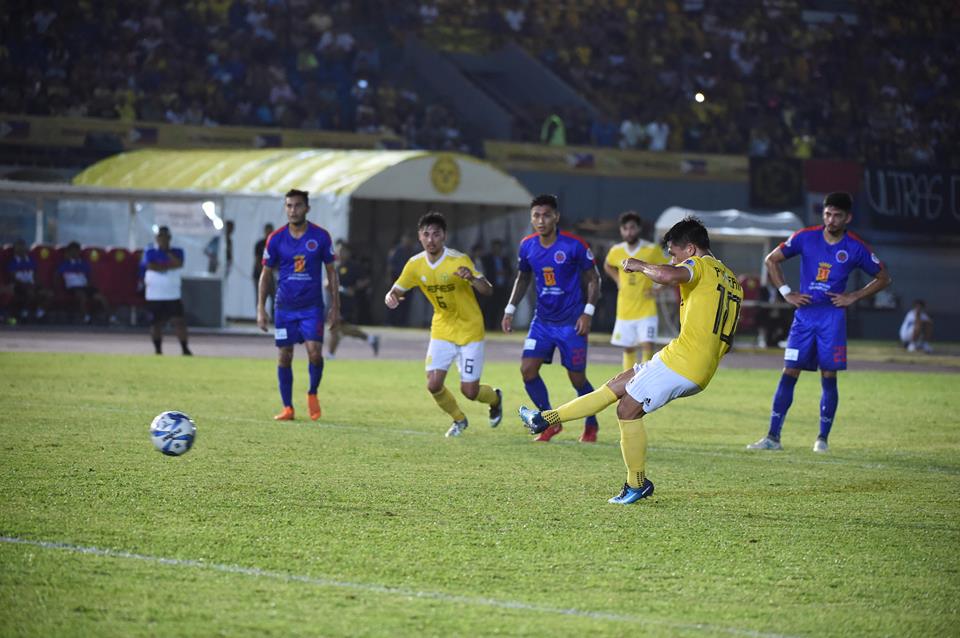 Ceres-Negros FC continues its PFL title defense when it hosts Davao Aguilas FC on Wednesday, June 5, at the Panaad Stadium in Bacolod.

The two squads were winless on the weekend with the Aguilas losing to Kaya in Iloilo and Ceres getting a draw with JPV.

The busmen are keen to bounce back from the frustrating match where they also lost ace playmaker Manuel Ott through a serious injury.

Both teams battled to an entertaining match last May 23 where the visitors had plenty of early chances after pressing the home team well. Ceres adjusted forging chances of their own in the tightly contested first half.

It was 44th minute when the home team had the advantage after Simone Rota fouled Bienvenido Maranon in the box. OJ Porteria stepped in for the penalty and converted to the delight of the home fans.

Ceres made amends for a poor first half by punishing Davao in the second. Key interceptions translated into well executed counterattacks which saw Maranon earn his brace and seal the win for the Negros side.

With the defending champions leading by just three points on top of the table and the Aguilas eight points off second place, the two teams are going for the full three points Wednesday night.

“Of course tomorrows gonna be a tough match. We did a lot of adjustments and the boys are well prepared,” said Davao Coach Melchor Azures.

Davao midfielder Jason de Jong is very positive leading to the match even if the team is in transition in the last week.

“I know we’ve come off a loss against Kaya but we can see the big difference the way we play now. There’s a clear style of play. There is a lot of things we can get a lot of confidence from and we are ready for this game tomorrow,” said De Jong.

Ceres-Negros Coach Ian Treyes shrugged off the idea of having an advantage with the opposing team changing coaches last week.

“Any change (with he other team) has and advantage and disadvantage but for us we will still continue with our tactics and team play. Were still the same team as before and it doesn’t change the way we play,” said the Ceres assistant.

Ceres-Negros co-captain Louie Michael Casas treats tomorrow’s match as an important one given that the team has dropped points in their last match.

“In this kind of league, we cannot afford to lose especially at home. All of us are ready for tomorrow. We will give our best especially here in Panaad,” said Casas.

“We would like to invite everyone especially our fans as we need you for the big game tomorrow. Hopefully they’re going to witness a good game tomorrow and Ceres will give their best to get the three points,” he added.

Gates will open at 5pm with free entrance given to the home fans. Seats will be given on a first come-first served basis. The Match will also be shown live via PFLtv.ph.