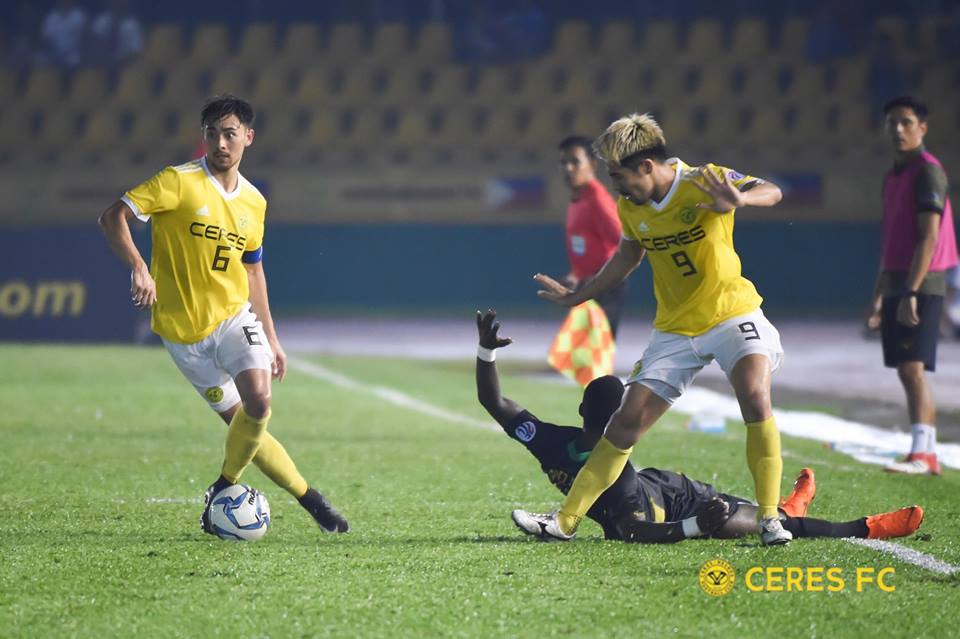 Ceres-Negros FC clawed from a goal down late in the match and earned a 1-1 draw against Kaya FC-Iloilo last July 7 at the Iloilo Sports Complex. Robert Lopez-Mendy scored for the home squad while Kevin Ingreso added another for the visitors.

The match started slow for both teams as rain dampened the occasion before the start of the game. Both squads had a difficult time with the wet pitch limiting them to tight midfield battle.

A crazy sequence ensued in the 15th minute when Stephan Schrock floated the ball towards goal with Ace Villanueva punching it out for safety. Moments later Mendy tried from distance only to have Toni Doblas punch it out for a corner.

Masa Omurad had a chance from the corner kick but his header went straight to the keeper. Patrick Reichelt chased a free ball in the 22nd minute and tried to sneak the ball between Villanueva and the post. The keeper however did well to contain the effort.

It was controversy in the 27th minute when Reichelt swung the ball toward Schröck who was clipped by Omura inside the box. The referee did not blow the whistle which allowed Takimi Uesato to take a shot but the keeper saved the opportunity. The away team complained of the non call but were not entertained by Michael Barajas.

OJ Porteria was fouled near the corner of the box in the 38th which saw Ingreso taking the free kick. The midfielder struck well to the top corner but the keeper punched it wide.

Super Herrera blocked a dangerous ball from Mendy for a corner with Tacagni heading wide in the resulting play. The halftime whistle blew with both teams scoreless after one minute of injury time.

It was Ceres who had the initial chance in the 49th minute after Schröck found Uesato who poked the ball into goal and forced Villanueva to another fine save.

Kaya would have their own chance but a deflected effort from Jovin Bedic was contained by Doblas. Schröck barged into the box again and released to Reichelt but he sliced his shot in front of goal in the 52nd.

Substitute Mike Ott had a good chance in the 70th when he picked a rebound inside the box. His attempt however went over the bar. Kaya had a glorious chance in the 76th minute after substitute Eric Giganto had a good run on goal. Super was quick to chase the attacker and block the shot in time.

Mendy sent a well-measured free kick into goal but Doblas punched it out for safety. The Kaya striker wouldn’t be denied later when a goal kick was headed back to his path setting up a one-on-one with Doblas. The Senegalese player shot over the rushing doblas to get ahead in the 80th minute.

Ceres-Negros earned an equalizer minutes later when Kevin Ingreso sweetly hit the top corner from twenty yards to the delight of the away fans. Both teams fought hard for a winner but the three minute extension wasn’t enough to leave the score to end at 1-1.

“We just came to play football,” said Ceres Coach Risto Vidakovic who was frustrated with a foot injury sustained by Schrock late in the match which forced the star off the pitch.

“It very difficult for the players because they don’t feel any protection and nothing is given. We’re only trying to win with football, nothing else. I hope the other clubs, they will also do the same,” he added.

Ceres-Negros maintained its nine point lead on top of the table with seven games left in the fixture list. The will meet Kaya FC again on July 11, Wednesday, for their final meeting in the league.