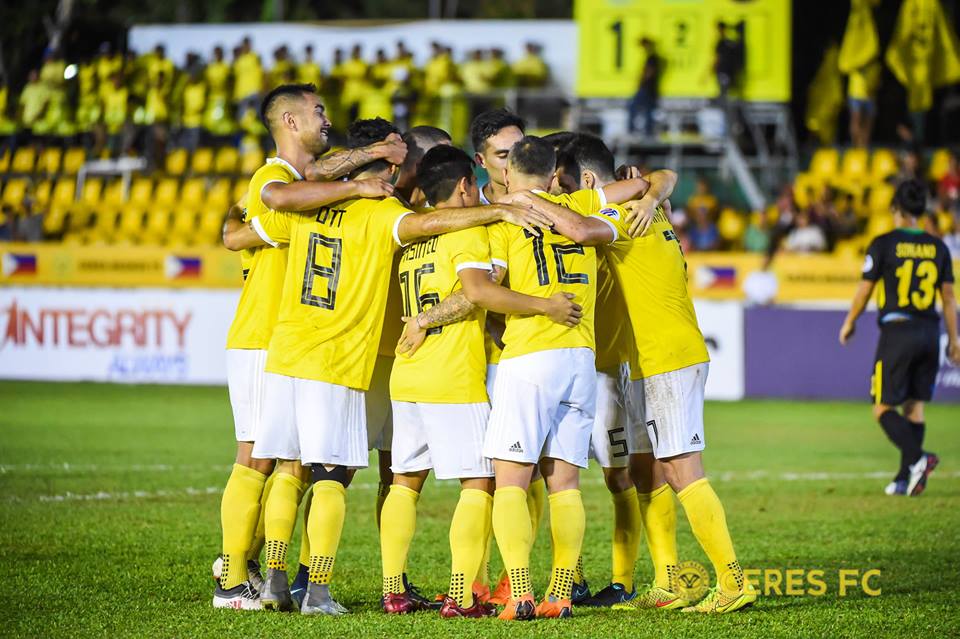 Ceres-Negros FC scored a hard-earned 2-0 victory against rivals Global Cebu last April 18, 2018 at the Rizal Memorial Stadium. Mike Ott and Stephan Schrock scored a goal each with Schrock earning Man of the match honors for the Negros side.

The visitors controlled the tempo in the early going and almost scored in the 6th minute when a long free kick from Carlie De Murga reached Bienvenido Maranon who was all alone up top. The Spaniard however missed his golden opportunity when his shot drifted wide.

It was in the 13th minute when they finally went ahead when Schrock outsmarted Marco Casambre to free himself on the wings before unleashing a cross towards the direction of Maranon and Ott on the far left. The younger Ott cleverly nicked the ball to the far post to avoid Patrick Deyto for the opener.

Sanchez was again dangerous minutes later when he nodded on a good free kick from Bugas  the ball bounced out for a goal kick. Ceres would return the favor five minutes later but Manny Ott’s shot was handled well by Deyto. The action picked up at the hour mark with both teams chasing an important goal.

Tempers flared in the 34th when Schrock and Sanchez were given individual yellows for a tussle on the pitch. Global would find the back of the net a minute later but the referee raised the flag for offside.

Defender Ian Lee made contact with a Paolo Bugas free kick which put everyone in attack in an offside position. Mike Ott had a shot from distance in the 37th but was collected well by Deyto.

Cebu had the best chance in the 41st when Sanchez broke free of De Murga but the strikers attempt bounced off the post and out for a goal kick. It was a bad omen for the home side as the visitors would double their advantage in injury time.

Manny Ott sent a perfect corner to Schrock instinctively unleashed a scissor kick sending the ball to the to the bottom corner and securing the 2-0 advantage just before the halftime whistle.

A well-worked Ceres-Negros saw Maranon evade Deyto before releasing to Mike Ott who then defaulted to his brother. Manny Ott’s shot however was blocked well by the keeper.

Toni Doblas was made to work by the Global offense when he punched out a dangerous ball which was recovered by Bugas whose rebound sailed over the bar.

Schrock returned the favor with a breakaway forcing a one-on-one with Deyto. The keeper had a hand on the chip with the ball still in the direction of the open goal. Casambre however chased well to clear the danger and deny Schrock of his second.

Munoz broke past the wings in the 57th minute but his power shot from wide forced Deyto into a foot save to deny a third goal. Global would make a push in the hour mark but Sean Kane and Doblas made important saves to preserve the lead.

Both teams would push the intensity in the remaining minutes but good defense from both squads meant that the match would end with Ceres getting three points from their first explosive encounter.

“Tonight’s game was a hard game for us,” said assistant coach Ian Treyes. “But we are happy to win this game and we always want to do our best for the people of Negros and to our management,” he added.

“This (win) is very important to us. With our rivalry from before, it’s very important for us to open the season with a win against them. Hopefully we can still continue our good performance on the next games,” said Treyes who was the captain of the Ceres side that beat Global in their first ever meeting in 2013 in the National Club Championship.