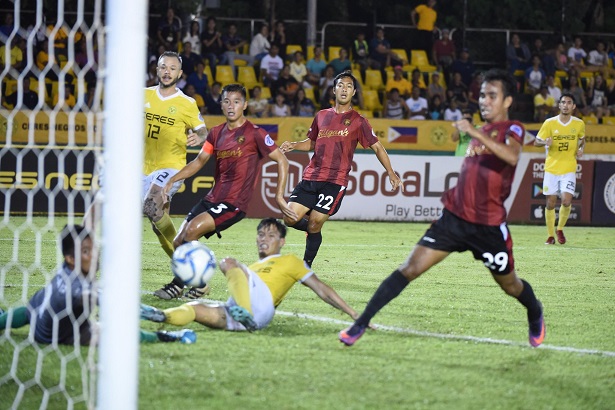 Ceres-Negros FC overcame a well-rested Stallion Laguna side to produce a 2-0 victory last June 27 at the Panaad Stadium in Bacolod City. OJ Porteria scored goals in different halves to provide the edge for the busmen.

Laguna who had their last game seven days ago were the more dangerous squad early in the first half. Abou Sy had the first shot on goal after his uncontested header hit the post in the 12th minute.

Negros had a good chance minutes later when Stephan Schrock released to Porteria on the wings who then rifled the ball to the path of Patrick Reichelt. The designated strike however poked the ball wide of the target.

Moments later, Stallions’ Fitch Arboleda salvaged a ball from the wings and crossed towards Nate Alquiros who’s header was off target. Abou was again the dangerman a minute later when he forced Doblas to a full stretch with his attempt.

The lanky striker would have another chance in the 26th minute when his attempt from a breakaway was blockedfor a corner. The suceeding play saw Balot Doctora try from the edge of the box but his deflected shot went straight to Doblas.

Ceres-Negros forced a penalty against the run of play when Mike Ott chased a through ball deep into the Stallion box. Darwin Regala fouled the Ceres midfielder forcing the referee to point to the spot. Porteria stepped up to the plate and buried the penalty in the 34th minute. 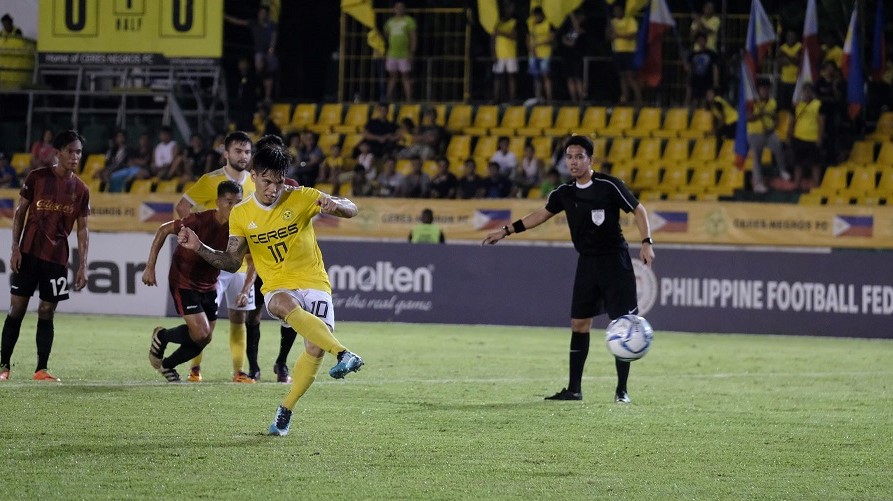 The home squad took control of momentum and conjured another chance just minutes after the opener. Porteria drilled in a cross to Schrock but his attempted backheel hit his other foot. Ott tried to recover the free ball but Stallion cleared the danger in time.

Schrock tried from the corner of the box in the 39th but his attempt curled towards the side netting. Ceres had a glorious chance to double but Mike Ott’s attempt from point blank was saved well by Benito Rosalia.

Stallion had two more chances in the dying minutes but Doctora’s attempt wass off target while Aroboleda’s shot was collected by Doblas. The busmen would go to halftime with a 1-0 lead.

Ceres-Negros started the half well when Schrock released to Porteria who’s shot was saved by the keeper. Reynald Villareal would have his own chance for Stallion but this attempt hit the side netting.

The visitors were dangerous again after the hour mark when Doblas punched away a corner which eventually led to a chance from Alquiros that went over. A dangerous pass to the box was foiled by substitute Amani Aguinaldo which De Murga eventually cleared.

Ceres then wrested momentrum in the remaining minutes to control the match. Ko Kyungjun fouled Schrock on a counter but the resulting free kick from Ingreso went straight to the keeper.

They wouldn’t be denied in the 84th minute when Uesato sent a cross towards Porteria who redirected it to the back of the net to complete his brace. Negros had the final chance in injury time but Omid Nazari failed to redirect a Schrock free kick into goal. The full time whistle blew with Ceres bagging a 2-0 win.

“I knew before the game that it will be very hard for us because Stallion will come in fresh and motivated,” said Ceres Coach Risto Vidakovic. “Our team has to play every game one-hundred percent because the opponents are always super motivated so its not easy.
“I think the guys did a really good job for one more time. They fought for each other and did everything for the team. I can always be proud of them (when they play) in these conditions,” he added.

The home squad saw the return of De Murga and Super Herrera to the starting lineup that has been fielding a very thin group in the past few games. “I hope that Bienve is coming soon and I hope he can play so we can rotate more,” said Vidakovic who is looking to refresh the team before the Zonal finals.

Ceres-Negros improved to 38 points with nine matches left to play. They lead Kaya by nine points with the second place team having a game in hand. The busmen will face Stallion Laguna again on Sunday for their fourth meeting.