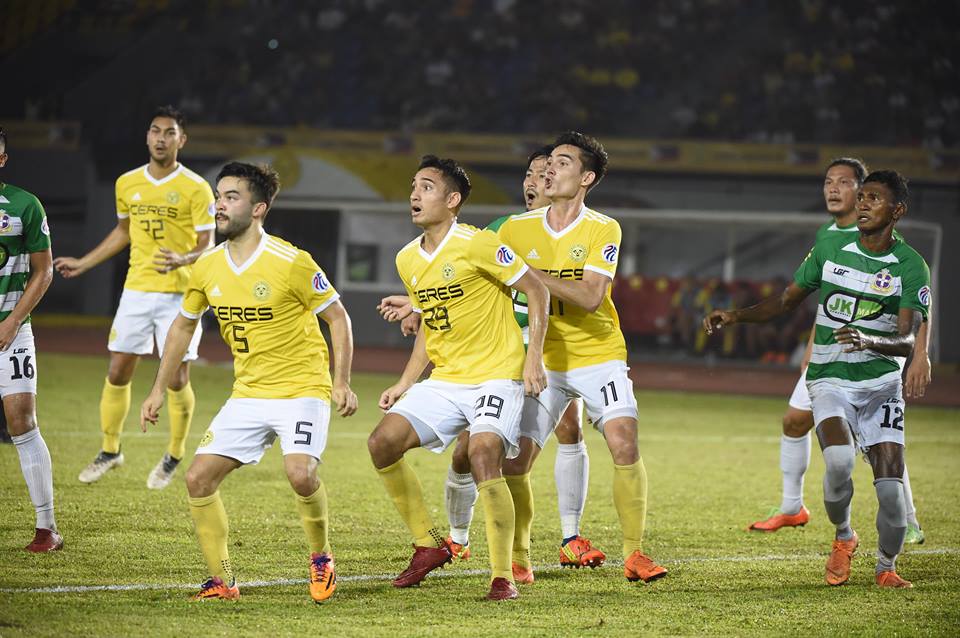 It was an interesting first thirty minutes for both teams as they got plenty of half-chances from each side in the early going. Uzoka had a weak shot collected by Michael Casas while Omid Nazari headed over the bar.

Ceres-Negros was in the offensive just before the half-hour mark which forced the visitors to consecutive key headers in their own box. The final chance however saw Martin Steuble’s volley going over the bar.

Momentum shifted to Marikina after a red card was given to Casas after his clearance from outside the box made contact with Uzoka who controlled for a shot which the keeper tried to parry in the 31st minute.

Eduard Sacapano entered for Takum Uesato and had to make a save right after after Keigo Moriyasu threaded the bottom of the wall for a chance.

The home side had a chance to get ahead after a wonderful through ball from Stephan Schrock finds Patrick Richelt who’s attempt on goal was wide.

The busmen had multiple chances even with a man down but they couldn’t seem to find the target. JPV had the last chance in injury time when a deflected ball allowed Moriasu to shoot past Sacapano only to see it go a foot wide.

Ceres-Negros had the best chance in the first minute of the second half when Nelson Gasic palmed a cross to the path of Mike Ott. The winger laid off to Schrock but his attempt was cleared in front of goal.

A foul by Lemuel Unabia inside the box to Reichelt forced Michael Barajas to point at the spot in the 48th minute. Schrock stepped up to the plate but his shot towards the near center was saved to the goal line by the keeper.

JPV started to take advantage of their numbers which led to Suzuki Tsubasa’s chance that went over the bar in the 52nd.

They wouldn’t be denied in the 58th minute when J Baguioro sprinted towards the Ceres box with Sean Kane making a touch on the ball. The striker however recovered and shot past Sacapano for the opening goal.

Sensing the advantage, Baguioro cut again into the box and cut the ball back to Jake Morallo whose attempt was deflected to the post and out. Kevin Ingreso sent a wonder free kick into goal minutes later but Gasic was there to punch the danger away.

Ceres-Negros had the lion’s share of possession but penetrating the JPV Marikina defense with one man down was a largely difficult task.

Baguioro was again the dangerman when he broke through the flanks and released to Uzoka. The striker however took to long as he passed the ball for a goal kick.

He wasn’t denied in the 87th minute after his solo run allowed him a shot on goal which doubled JPV Marikina lead, securing the win for the visitors.

“We have few players and many injuries and its hard for the players also but I’m still proud of them. They fought, we missed a penalty, and it was really a bad day for us. We have to forget it and think about the next game,” Vidakovic added.

Ceres-Negros will have back to back matches versus Stallion Laguna on June 27 (Wednesday) and July 1 (Sunday). The busmen are still on top of the standing with a nine-point lead over Kaya FC.