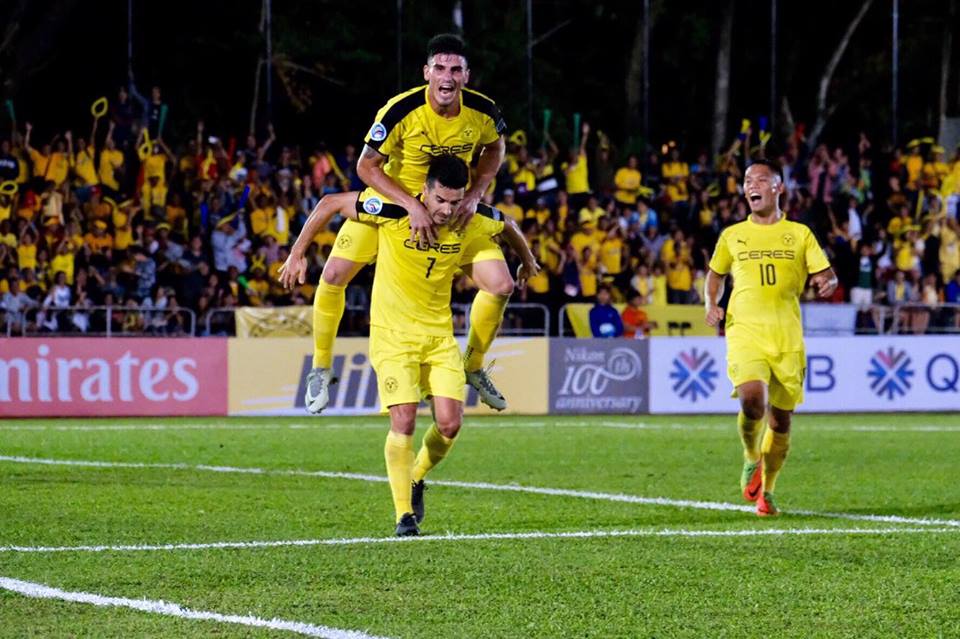 The Negros-based squad started early with Ramsay producing a stunner in the 1st minute by curling a half-volley towards the top corner. He would then try minutes later after picking a loose ball at the edge of the box but his strike was well wide. Tampines would then settle defensively, at times having six men at the back with Ceres controlling the tempo in midfield in the early going.

The Singaporean squad conjured a chance in the 20th minute with a header towards goal but Roland Muller was there to save the chance. Ryutaro Megumi broke free from the right with a full path towards goal but Super Herrera was there for a tackle forcing a goal kick for Ceres. It was a day for opposites defensively in the 24th when Izwan Mahbud prematurely rushed off his line to the dismay of Mustafic Fahrudin who nodded the ball his way. Maranon would collect and shoot the ball in the open net for Ceres’ second.

A brilliant individual effort from Manny Ott in the 38th minute saw him evade the defense before unleashing a stunner from the edge of the box to make it 3-0 for Ceres. Ramsay almost made it four in the 41st but his attempted Rabona was over the bar.The S-League Runners-up would try to take one back in the final minutes of the half with Madhu Mohana and Ivan Djoni getting good chances but they missed their marks. The half ended with a commanding 3-0 lead for the home squad.

The Busmen picked up where they left off in the second half with Rodriguez producing a left footed shot which hit the side netting in the 46th. Yasir Hanapi would produce a free kick from 30 yards but Muller was on the other end to collect. Ott would try to recreate his first goal but his shot was a foot over the bar. Singapore veteran Khairul Amri hit one from the edge but Muller was again there for the save.

Junior Munoz won the ball in the middle of the park and streaked to the right and delivered a cross towards Maranon whose shot to the bottom corner was cleared in time by Tampines. Moments later, Amri would set-up Megumi with a one-on-one with Muller but the Filipino International would produce a superb save to keep the clean sheet. Ceres would get their own 1v1 with Ramsay setting up a a ball towards Bienve who made no mistake and puts another one past Mahbud for Ceres’ fourth.

Ceres would complete the scoring in the 72nd with Ott lobbing to Jeffrey Christaens on the left, with the defender issuing a superb cross towards Rodriguez who redirects the ball towards goal to make it 5-0. With the high scoreline, both teams performance tapered of in the final twenty minutes until the final whistle.

The Bacolod squad registered their first win in the AFC Cup, putting them first place in Group G with four points. They are followed by Tampines with three, Hanoi with two and Felda United with one. Felda United and Hanoi finished with a 1-1 draw in Shah Alam in an earlier match. The win was also a welcome result for the 8,000 strong capacity crowd in the Pana-ad Stadium. Ceres-Negros will host Felda United on March 15 for their third Group stage match.