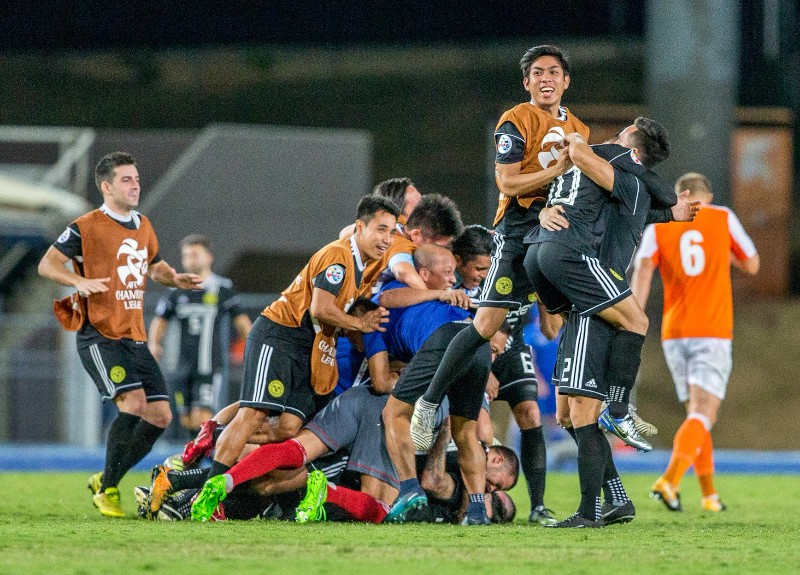 By Ceres Media   |   January 24, 2018
Comments Off on Ceres silences Roar, books slot in ACL Play-off round

BRISBANE, Australia – Ceres-Negros FC made history Tuesday night when they stunned Brisbane Roar with a 3-2 win at the QSAC Stadium in Queensland Australia. Bienvenido Maranon scored a brace while Omid Nazari added another for the visitors while Massimo Maccarone and Eric Bautheac converted for the home squad.

It was an even start for both squads as they created plenty of half chances in front of each others goal. Roar were the first to convert in the 35th minute after well placed ball from Brett Holman off a counter saw Maccarone tapping in the opener uncontested.

The Busmen came back with a vengeance after Super Herrera headed a Kevin Ingreso corner towards Maranon whose attempt bounced off a defender and into the goal for the 43rd minute equalizer.

Brisbane had a good chance in early in the second half with Bautheac attempting an acrobatic shot but the Frenchman sliced it wide. Tempers flared in the 54th minute with Herrera and Papadopoulus figuring in a shoving match but the referee stepped in to control the match.

Brisbane’s Ivan Franjic had a weak shot blocked by Tony Doblas who was a steady presence in between the posts for the Philippines squad. A well placed cross by Jeffrey Christaens was cleared but Stephan Schrock’s rebound after was off target.

The PFL Champions went ahead in the 65th when Mike Ott sent a perfect through ball towards Maranon who brilliantly curled the ball past the fully stretched Jamie Young. An attempt from Schrock was deflected for corner for which set up an important corner for the squad.

Kevin Ingreso’s delivery was not dealt properly by the Roar defense which saw the ball bounce towards Nazari in front of goal. The midfielder put enough power in the shot which bounced off the keepers’ hands and trickled in to the far post in the 75th minute for the third Ceres goal

The home squad pushed for an equalizer in the remaining minutes and were rewarded in the 87th when Franjic’s strike hit the back of the net. The crowd egged their squad for an equalizer with five minutes added on but the Filipino side held on for the 3-2 victory.

“I’m really proud of my players, especially because we are still not prepared for these kind of games,” said Ceres Coach Risto Vidakovic. “You can see in the last 15-20 minutes that the intensity went down. I’m really proud of them. They played ninety minutes, they fought, and I think we deserve to win.” he added.

Man of the Match Bienvenido Maranon was proud of the achievement by the club after beating the odds and securing the place to the final round of qualification of the elite competition.

“I feel so happy, not just for me that I scored two goals, but I feel really really happy for the team because this club is amazing. We are doing everything good in the last few years,” said Maranon who with the core of the team won the ASEAN Zone of last years’ AFC Cup.

The club again made history as being the first Philippine squad to make it to the Play-off round of Asia’s elite club competition where they will face Chinese side Tianjin Quanjian.

Though winning big in Brisbane, Vidakovic is still treating the match as part of the pre-season for the squad who has just started their training in the last three weeks.

“We have to treat the (Tianjin) game like this one (Brisbane) . We have to enjoy it, try to compete with them, and we don’t have pressure,” said the Ceres mentor.  That’s the good thing for us. Whatever we do , if we get a good result, for us it’s a plus.”

Ceres-Negros will face the the Chinese club on June 30 which features the like of Brazilian Alexander Pato and Belgian Axel Witsel. They will also have to deal with the weather as the port city is averaging sub-zero temperatures in the last few weeks.