Ceres-Negros FC bowed to FC Istiklol losing 4-0 last August 22 at the Hisor Central Stadium in Tajikistan. The Busmen absorbed two goals in each half to give the Central Asia Zone winners leverage heading into the second leg of the Inter-Zone Semifinals of the AFC Cup.

The visitors looked good early in the match, getting possession while trying to unlock the home defense. It wasn’t long before Istiklol took over stamping their dominance in the first half. A low corner fell to naturalized player David Mawutor who skied the first attempt in the 9th minute.

Istiklol would generate half chances before they were awarded a penalty in the 23rd minute. Kota Kawase was called for a foul in the edge of the box with a challenge on an Istiklol player. Defender Akhtam Nazarov made no mistake from the spot two minutes later for the opening goal.

The Lions were relentless in the next ten minutes, generating plenty of shots in danger areas but Ceres took some form of control up to the final minutes of the half. The final minute saw the Tajikistan club getting their second after Romish Dzhalilov curled in a ball to the far post. Istiklol would finish the half leading 2-0.

The Negros squad started stronger in the second half in an attempt to salvage an away goal. Bienvenido Maranon’s shot from a well worked team play went wide while an Iain Ramsay cross was dealt with bu Nikola Stosic. Ceres would earn two corners but the solid backline of the home squad was there to clear the danger. 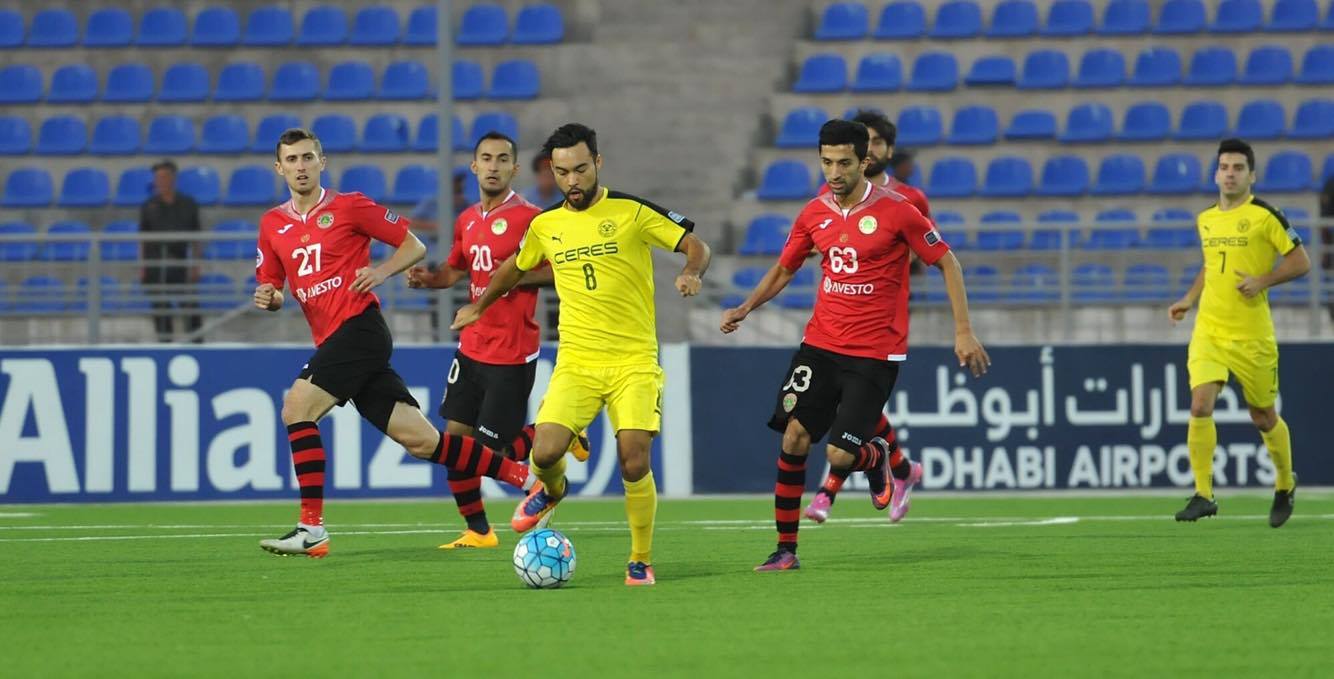 Ceres worked very hard from the frontline to the midfield but the Istiklol defense together with eventual Man of the match Mawutor was equal to every attempt. Maranon would get another chance in the 62nd but his lofted shot went straight to the keeper.

Fernando Rodriguez would come in the 65th minute but a missed tackle minutes later allowed Manuchehr Dzhalilov to pick up a loose ball before smashing it in for the 3-0 lead. The Dushanbe-based squad had a chance to make it four but Carli De Murga cleared the ball away from Mawutor.

Both teams missed their chances in the final minutes before Istiklol would secure the fourth goal for the 13,800 home fans. Manuchehr scored his brace two minutes from time after getting a good through pass from Dilshod Vasiev to complete the victory for the Lions.

Ceres-Negros will need to overturn the advantage at home in the attempt to get through to the next round. They will host Istiklol in three weeks time for the second leg in Bacolod. The match is scheduled on September 12 at the Panaad Stadium.

Photos from the AFC Cup/Lagardere Sports

Ceres FC
Ceres-Negros Football Club formerly known as Ceres-La Salle FC or Ceres FC, is a Filipino professional football club based in the city of Bacolod, Negros Occidental and is also a member of the Negros Occidental Football Association. Ceres FC plays in the Philippines Football League, the highest level of Philippine club football.
Matches
Categories
Recent Posts
Follow Us