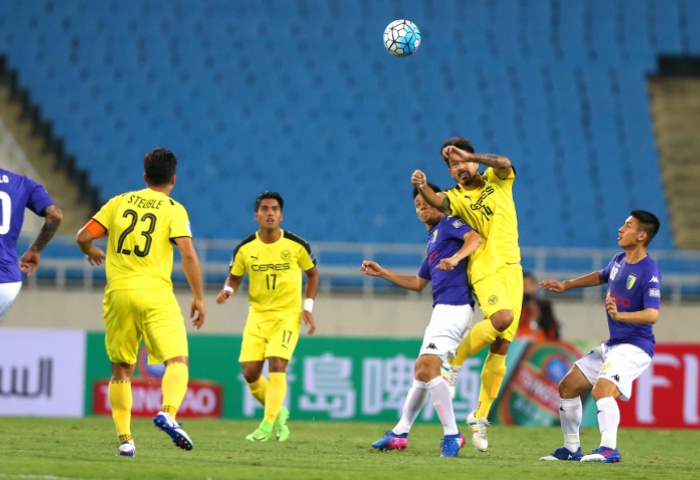 Bacolod squad Ceres-Negros FC scored an important 1-1 draw against an in-form Hanoi FC last February 21, 2015 at the My Dinh Stadium in Hanoi. Bienvenido Maranon opened the scoring early in the second half with Nguyen Van Quyet rescuing the home squad with an equalizer in the 57th.

It was Ceres who had the the first attempt when Manny Ott released Fernando Rodriguez who shot the ball wide in the 3rd minute of the match. Both teams played even in the first fifteen with the Philippine squad fighting well with the Vietnam champions. The home squad imposed their physical presence and creativity to create shots and putting the Ceres defense to work.

A crucial block by Junior Munoz and saves by Roland Muller kept Hanoi at bay until the 28th minute when Nguyen Van Dun rose for a header which luckily hit the inside of the post and bounced back towards the Ceres debutant. The Busmen had their chance when Ott took a free kick from 25-yards which went over the bar. Hanoi had a good chance in the 31st but French player Loris Arnaud sliced the ball wide.

In the 42nd minute, Manny Ott sent a30-yard free kick towards goal but Hanoi keeper Phi Minh Long punched the ball forward for a counterattack. The ball eventually found its way to Gonzallo Marrankle who was all alone, but his cheeky shot was blocked by the Ceres defense. Van Quyet ran the wings in the final minute sending the ball to Nguyen Quang Hai who then shoots high. The half ended 0-0 with Hanoi dominating the most part.

Ceres started the second half strong, pressuring the home team in their own half. This earned them their first corner kick in the 48th minute where Kevin Ingresso delivered a beautiful ball towards Manuel “Super” Herrer who heads it toward the bottom corner. The ball hit Maranon on the knee but the ball bounce toward his right which allowed him to blast the ball towards goal which stunned the small home crowd.

Hanoi pushed for an equalizer and were rewarded in the 58th when Van Quyet scored a brilliant individual goal. The Vietnamese set himself up for an acrobatic volley that he smashed to the back of the net. The home squad piled on the pressure with Gonzalo and Van Quyet getting good chances but the Ceres defense stood firm including the last minute when Carli de Murga won a header over Gonzalo.

“I think we had a good result for our first game of competition this year. We played a very very strong opponent and big compliments to the whole team to everybody also in this club. Worked hard during the preseason and thats the result. Come to Hanoi and play a good game and go home with a point. Its a good way to start the AFC Campaign for us,” said Ceres Captain Martin Steuble.

The Busmen are tied for second place in Group G with Hanoi with Tampines Rovers topping the group after a win over Felda United in Singapore. They will next host Tampines at the Pana-ad Stadium on March 7 and Felda on March 15.