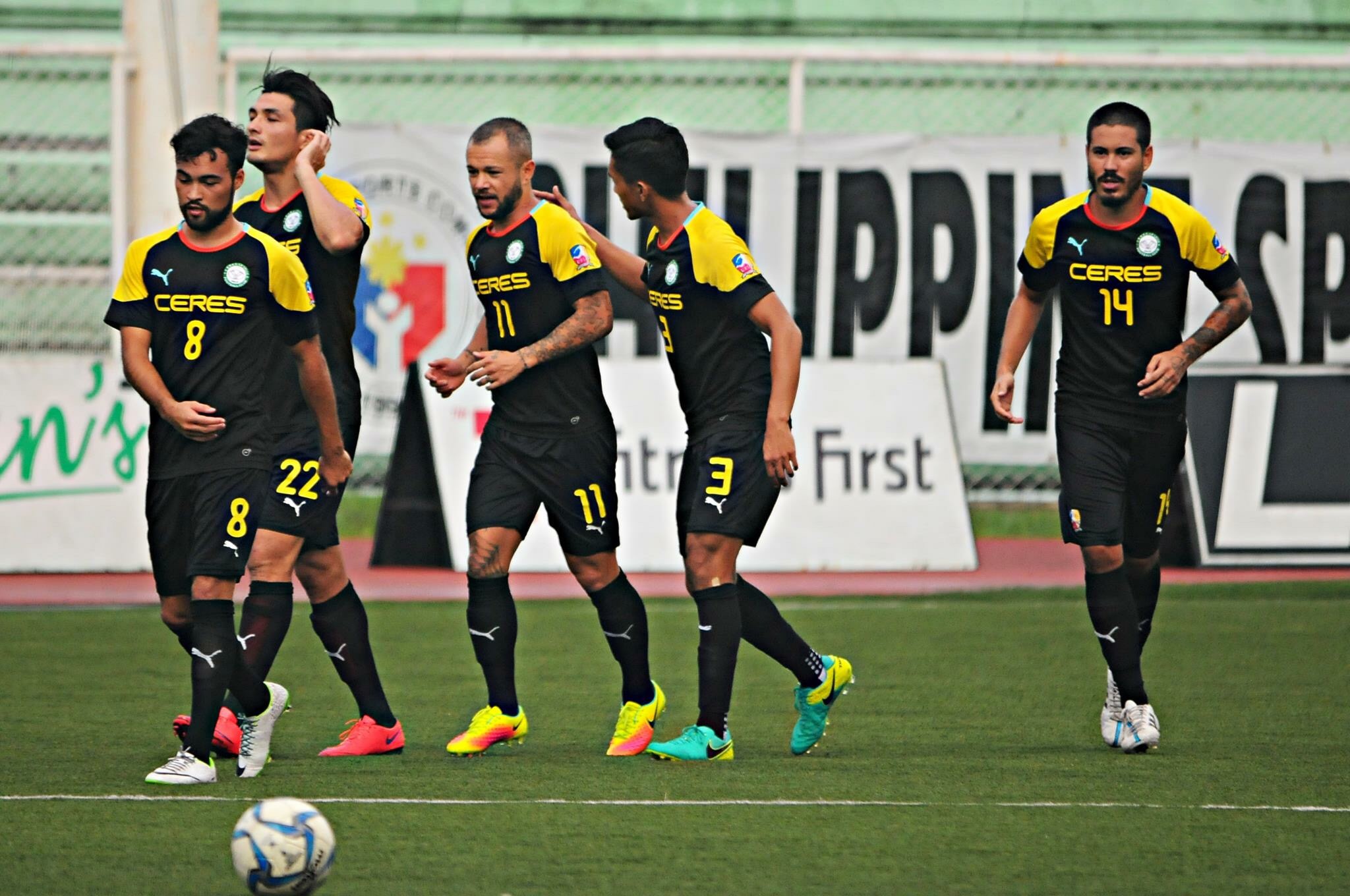 The Busmen came out firing with Schrock scoring early in the 8th minute. The Filipino international shot a free kick just outside the box with the ball getting a slight deflection before going into the net. The Bacolod squad started with Orman Okuinaiya, Shrock, and Bienvenido Maranon up front forcing Loyola to adjust. Shrock would try again from long distance five minutes after but Loyola keeper was out to make the save.

The Meralco-backed squad would have their first attempt in the 16th when Taj Minniecon tried to chip Louie Michael Casas from 30 yards but the chance was way over. It didn’t take long before Ceres to double their advantage after Maranon made a brilliant layoff to Shrock who blasted the ball into goal in the 21st minute.

Phil Younghusband tried from fourty-five yards minutes later but it was way over. Maranon would have his chance in the 29th after he skipped past his defender releasing a well placed shot which bounced off the inside of the near post and out. Loyola would get another chance with a free header from James Younghusband but it goes wide.

Confusion in the middle of the pitch in the 39th allowed Minniecon to take a shot from thirty yards but Casas denies the Loyola player. Loyola would take some time on the ball, generating three corner kicks but no chances were created in that sequence. Ceres would again hit the woodwork in the final minute when Hasegawa rushed out of his box towards Schrock who veered away and unleashed a shot that hit the crossbar. Ceres-La Salle would end the half with a two goal lead. 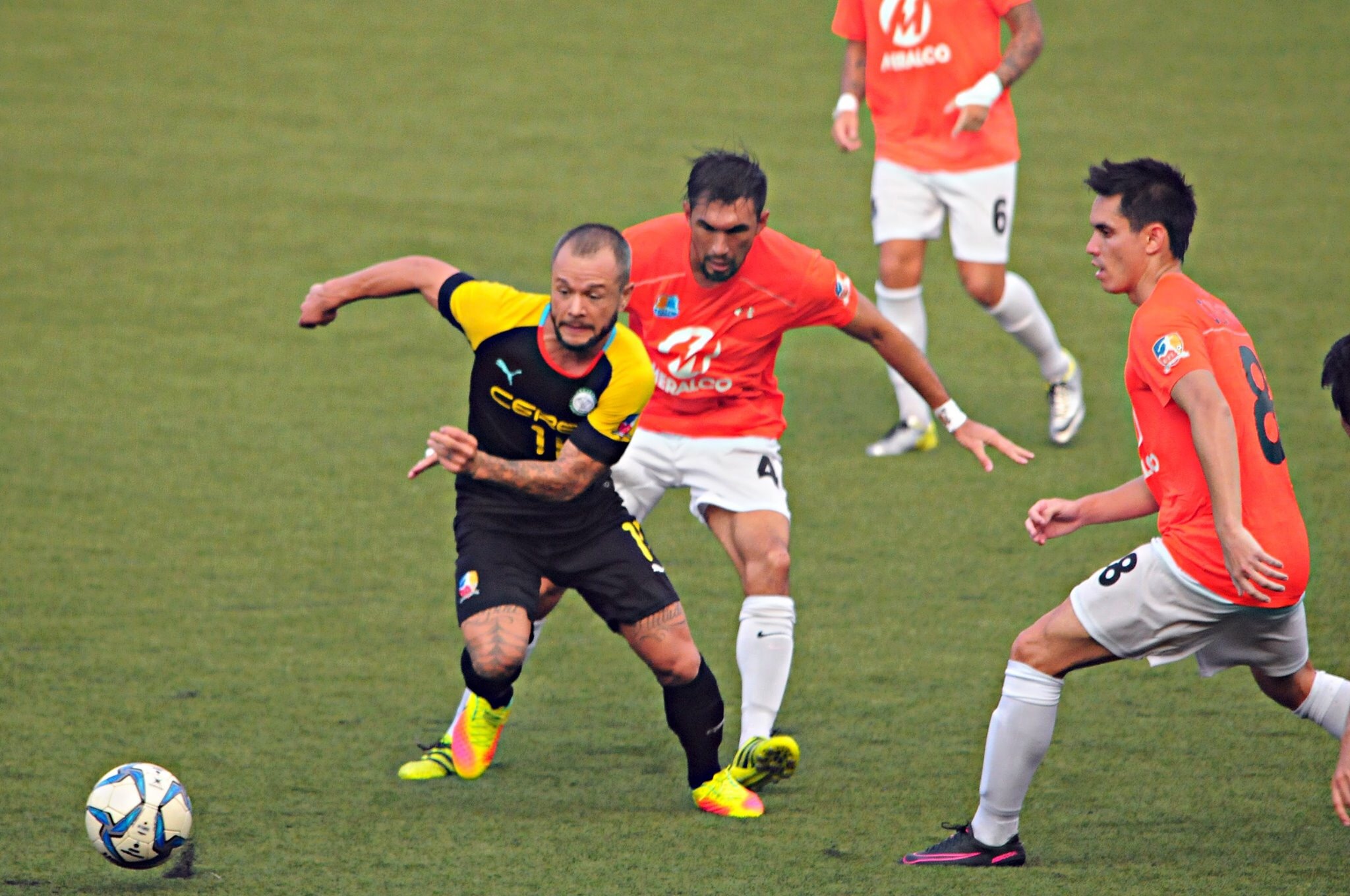 The defending champions didn’t rest in the second half after Maranon getting a shot on goal that was just wide after two minutes. Team play would commence moments later when Maranon layed off to an open Shrock who opted to pass to a rushing Carli de Murga who shoots over the bar. Seconds later Ott would latch on a through pass which allowed him space and time to shoot past Hasegawa to score Ceres’ third.

With the lead in tow, Ceres allowed Loyola to get more of the ball with the younger Younghusband finding Minniecon whose near shot was blocked well by Casas. The Ceres goalkeeper returned to action after getting married the previous week and didn’t waste time in producing an inspired performance. Greatwich found himself alone in the box but the Ceres defense caught on, dispossessing the Loyola midfielder even before he had a shot on goal.

In the 63rd, defender Jeffrey Christaens found himself on a counter and blasted the ball towards Hasegawa who saves the ball. Okunaiya would also find some space in the edge of the box but the Loyola keeper collected his shot from the edge of the box. Maranon would get his own chance in the 68th but Hasegawa did well to close him down for a Ceres corner.

Loyola would then get a stretch of chances in the final twenty minutes, first with Phil Younghusband trying from the edge but his shot was wide. Phil was again dangerous after releasing a cross to Joaco Canas who heads into the danger area but the defense was there for the clearance. The Azkals dangerman would again provide a dangerous ball into the box but Casas was there to tap it out. It was in the 79th when Jason Sabio blocked a final pass from Minniecon which prevented a Loyola goal.

Schrock would get his hat-trick in the 83rd minute after a box clearance from Christaens found its way to Schrock who timed his run well from the half-line and slid another left-footed shot past a hapless Hasegawa for the 4-0 lead. Loyola would get their own when a free kick from Phil was met by James whose header was tapped wide by Casas. Greatwich was however there to put Loyola in the scoresheet. The Loyola midfielder had another chance in the dying seconds but Casas was there for a stop and ending the route for Ceres.

With the win, Ceres is now in 2nd place with 35 points jumping over JP Voltes who have the same number but with a lesser goal difference and Loyola with 34 points. The defending champions will face Laos on September 28 before the clash with Global on October 16 after the international break.