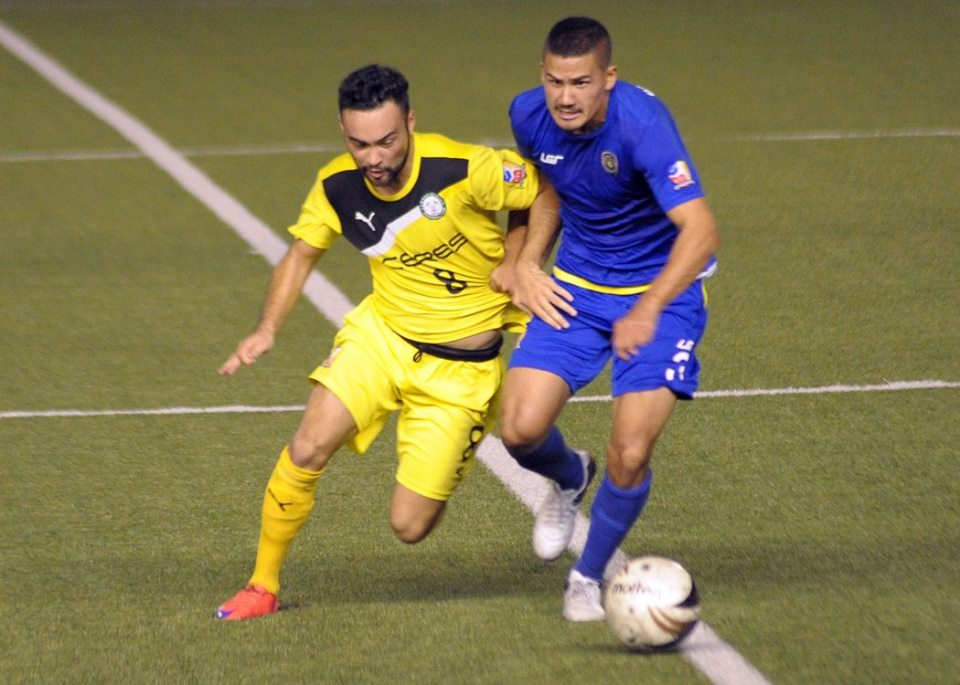 The match started with both teams engaging in a tough physical battle.  One of which saw Stephan Shröck being clipped in a breakaway in the 8th minute.  Shröck hurriedly took the free kick passing on to an open Martin Steuble who then blasted a 30-yard rocket towards goal.  The midfielder’s left footed shot breached the top corner,  beating Patrick Deyto, and giving Ceres the 1-0 advantage.

The Leyte FA-backed squad pushed for an equalizer getting the better of the possession and chances in the first half.  They were rewarded in the 36th minute when Sato’s free kick found its way to an unmarked Milan Nikolic who scored in an acrobatic fashion.  The Serbian centerback tracked the ball towards goal and delivered a twisted volley while falling down to score the leveler for Global.

In the 45th minute Ceres’ Adrian Gallardo unleashed a cracker from the edge of the box but his shot was parried by Deyto and eventually cleared by Aguinaldo.  Shröck tried to pick out the Global keeper from twenty yards but his shot was saved moments before the halftime whistle.

The second half also started with the same physicality as the first as Nikolic and Gallardo were given yellow cards on separate occasions for their particularly rough challenges. The game settled down after the hour mark which saw both teams testing each other’s back lines.

The real chances came with twenty minutes left when Nazari launched long range stinger which was superbly saved by Casas.  In the 76th, Hikaru Minigeshi sneaked in a shot from the left but the Ceres keeper was equal to the attempt.  Casas was not so lucky a minute after when a free ball found it’s way to an open Matt Hartmann who buried the shot to the bottom corner from twenty yards out.

Ceres had their best chance to equalize in the 80th minute when Shröck issue a beauty of a pass to a rushing Jeffrey Christaens.  Christaens tried to chip over Deyto from close range but this shot didn’t have enough power, allowing the keeper to easily collect.

Global had another chance to pad their lead in the 88th when Milad Behgandom’s rebound off a Casas save went a foot wide of the top corner.  The Busmen had a half-chance in injury time when a Shröck free kicked rolled in the face of goal but no none of the Ceres players were quick enough for the tap in.  Global’s Nazari had a chance in the last minute for a quick counter but his run was easily checked by Kama.  Ceres and Global finished their group campaign with 12 points but the former clinched the top seed for Group B with a superior goal difference.

“Of course we are disappointed with the outcome of the game. We hope that we could perform better and get the better result, even though we’re clear first already and (have) qualified for the next stage of the cup.  As a player you always wanna go out and win the game but Global had a very strong team out there tonight, so congratulations to them” said midfielder Martin Steuble. “We wanted to do better and we wanted to win the game.  We tried a different tactic (today) and maybe it didn’t work out a hundred percent, but that’s football and that’s how we learn to be better” he added.

Ceres-La Salle will resume their UFL Cup campaign with the Quarterfinal match against Forza FC set on the 3rd of April.  The Bacolod squad is now focused on their consecutive AFC Cup away matches against Lt. Sheikh Jamal and Tampines Rovers on March 8 & 15.