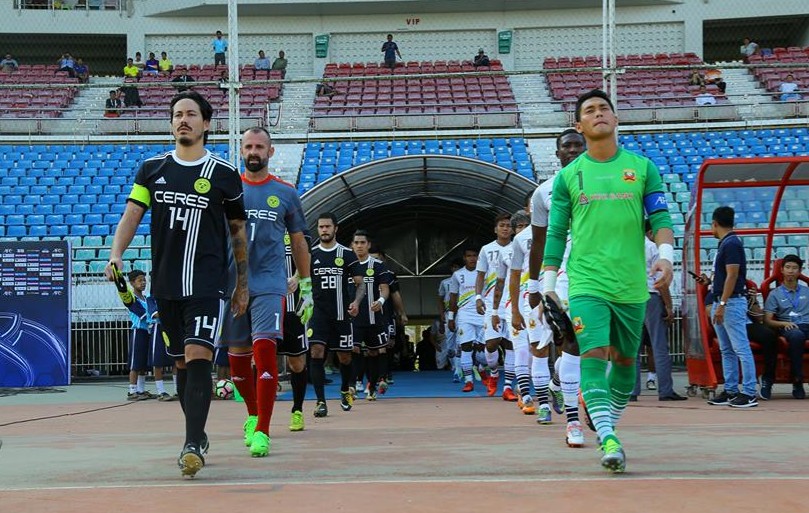 Ceres-Negros FC puts their unbeaten run at stake when they meet Shan United in Match Day 3 of the AFC Cup. The busmen will host their former AFC Champions League opponents on Tuesday night in Panaad.

It will be the second time that both clubs will meet in history. The Filipino squad prevailed over their Myanmar rivals in the first round of the Preliminaries, winning via penalty shootout.

The result however is already immaterial as both teams already crashed out of Asia’s elite tournament. The stakes in the next match however are more important as the race to lead Group F is now wide open after the results in Match Day 2.

Ceres-Negros leaned on a late equalizer when they faced a stubborn Home United squad last week in Singapore. The home squad defended 1-0 advantage  early in the first half to frustrate the misfiring visitors.

Super Herrera managed to score an equalizer late in the second half to save the busmen from blushes after a convincing opening victory against Boeung Ket.

Shan United turned a corner in their second match away in Phnom Penh when they came from behind to overcome a goal deficit from the Cambodian squad.

Boeung Ket went ahead when Maicon scored a glorious free kick but Dway Ko Ko’s equalizer and Christopher Chizoba’s go-ahead goal was enough to give them their first three points in the tournament.

Shan United Coach Soe Myat Min rotated his squad in their last match and was rewarded especially with Dway who came on as a sub in their opening match against Home United. The youthful coach will have the full squad in his disposal when they meet Ceres in Bacolod.

Ceres-Negros will be keen to get back in home soil after a disappointing performance in Singapore. The Busmen had difficulty finding their range after only making five shots on target the whole match.

The Negros squad will also have to figure out how to deal with defenses, similar to Home United’s, which aims to frustrate and limit the their goal scoring capabilities.

Both teams will play consecutive matches in the group stage in March, first in Bacolod and next in Yangon on the 13th.

With only a point separating the top three, the next two matches will be treated as knock out games given that only one team is assured of qualification to the next round.

The all-important match is set to kickoff at 730pm sharp at the Panaad Stadium on Tuesday. Details on the TV coverage will be announced soon via the Ceres-Negros FC social media accounts.