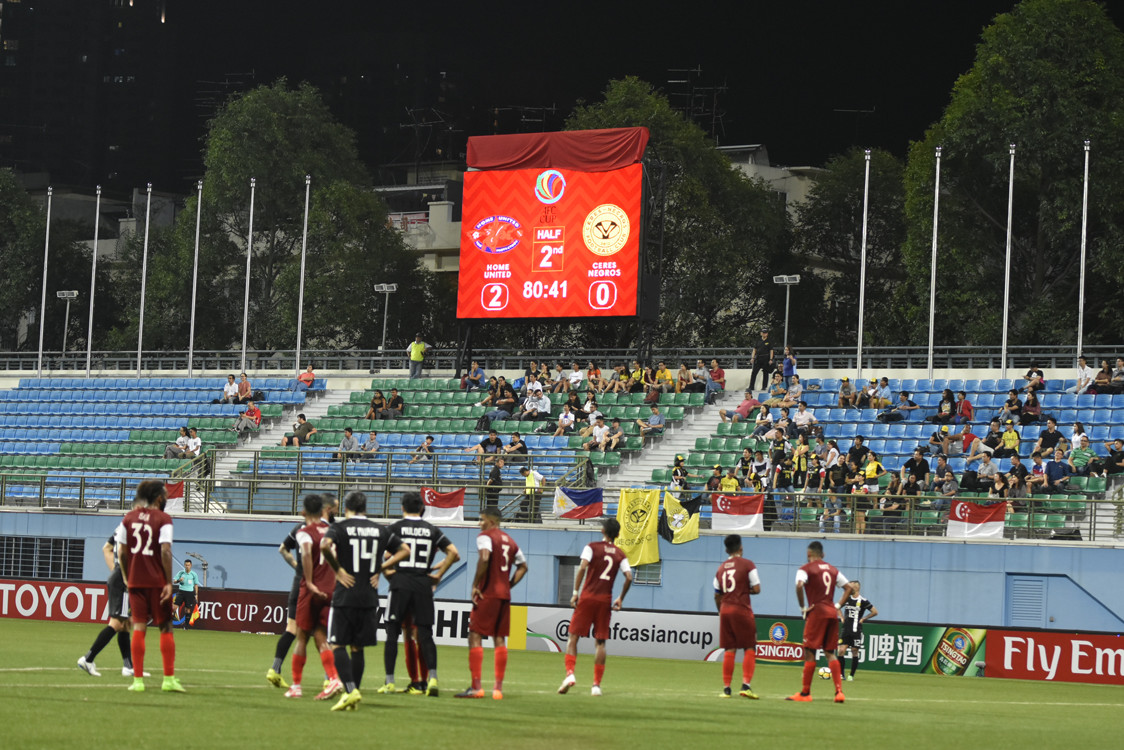 Ceres-Negros succumbed to a 2-0 defeat (1-3 on aggregate) versus Home United in the 2nd leg of the ASEAN Final of the AFC Cup last August 8 at the Jalan Besar Stadium in Singapore. Second half goals from Shakir Hamzah and Song-Ui Young proved to be the the difference in the match.

The busmen had a good start in the first half after a free kick from Stephan Schrock found Carli De Murga whose header was a yard wide of the mark in the 3rd minute. Schrock and Blake Powell had some chances later on but all were cleared to the goal line.

Patrick Reichelt had the best chance when he nodded in the ball after a Schrock delivery but Rudy Khairullah was there for the block. Powell recovered well but this attempt from a tight angle was saved by the keeper.

The home squad had their first chance on goal after an Izzdin shot but Toni Doblas punched it our for a corner. Minutes later, Isaka Cernak received the ball from a dangerous position but his attempt after an evasive move was well wide of the goal.

Super Herrera had another chance from a header in the 22nd but his attempt went off the woodwork. A solo run from Curt Dizon near the half-hour mark saw the winger beat defenders but his final attempt went a foot wide.

Reichelt was downed in the 34th minute when Rudy charged out for the ball but hit the Ceres player in the head knocking him out immediately. Medical staff rushed into his aid as he was unconscious immediately after the collision. The striker was sent to the nearby hospital for treatment.

Home United had a golden chance to get ahead in the last minute of injury time but a smart defensive block by the backline allowed Doblas to collect the ball. The referee blew the whistle with both teams scoreless at the half.

The Singaporean squad went ahead in the 62nd minute when Shakir Hamzah rose over Ceres defense to head in the opening goal. Schrock tried to get one back for the Negros squad minutes later from twenty-five yards but his attempt curled past the top corner.

Substitute Kevin Ingreso sent a free kick into the box in the 72nd but Super didnt get enough contact to bother the keeper. Schrock’s sent a ball into the box but the ball bounced from the defender to the keeper.

The Protectors went 2-0 up after a ball from Faritz found Song in front of goal. The Korean, who was unmarked in front of goal, made no mistake to head past Doblas for the 3-1 aggregate lead in the 74th minute.

Ceres chased for a goal in the remaining minutes when Schrock tried to bend a ball from the outside but it curled away near the far post. A scramble in the box allowed Ceres to hit the ball at the back of the net but Schrock was found to be in an offside position beforehand. Home United held on on the remaining minutes to clinch the win and their first ASEAN Zone title in history.