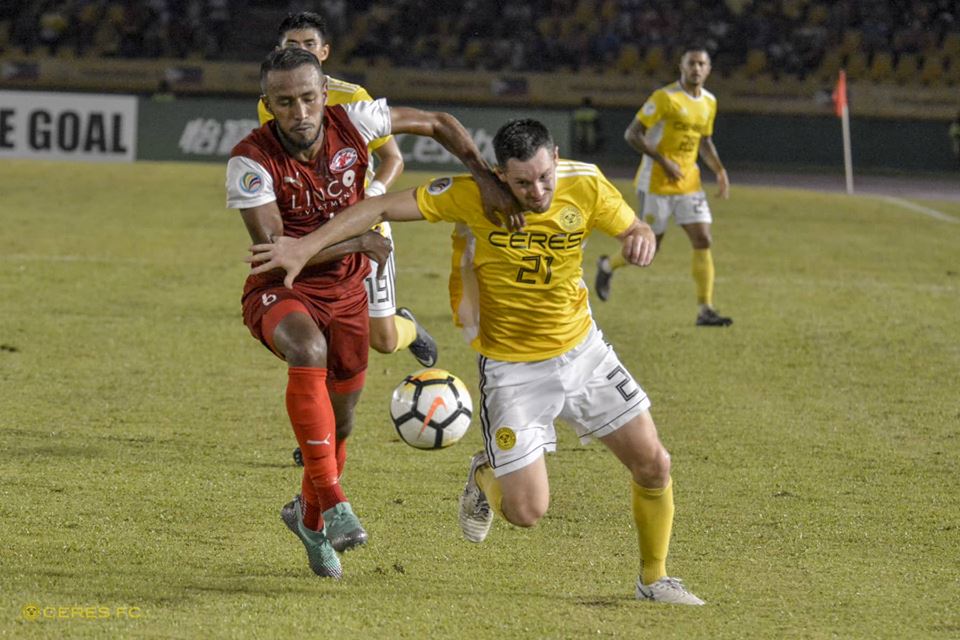 Ceres-Negros and Home United battled to a 1-1 draw in the first leg of the ASEAN Zone Final of the AFC Cup last August 1, 2018 at the Panaad Stadium in Bacolod City.

It was Ceres-Negros who led early in the match after a foul on the box on Powell by centerback Shakir Hamzah forced the referee to point in the spot. The Aussie striker made no mistake a minute later to put the Filipino side ahead. 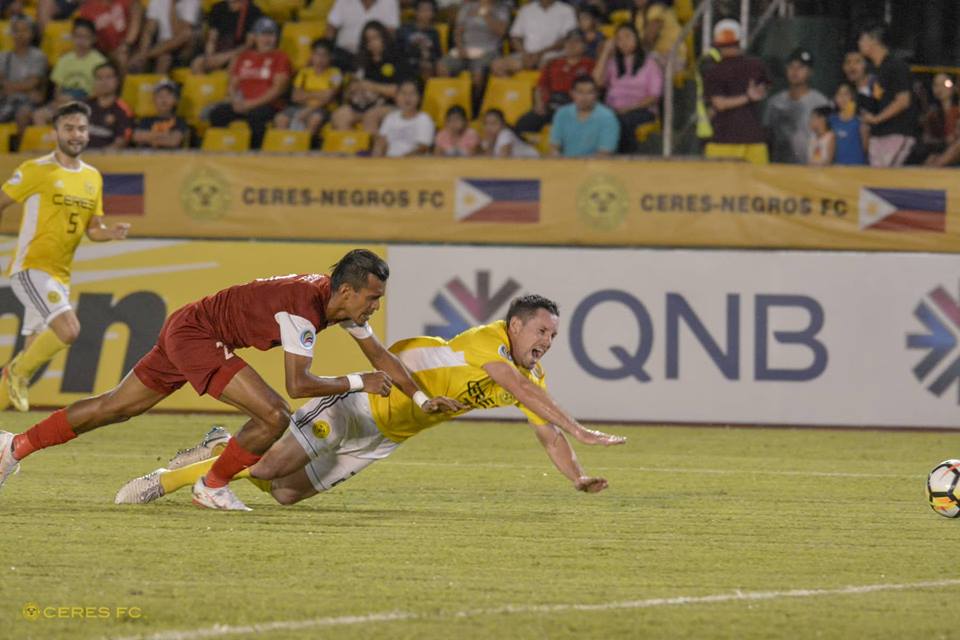 Home United equalized in the 23rd minute when Shahril Ishaks header bounce off the crossbar and into the path of Cernak who immediately nodded in the goal into the back of the net.

With the important away goal in the bag, the visitors frustrated the home squad with disciplined defense which limited the attack for the Philippine champions.

It was in injury time when Ceres had their best chance after goalkeeper Rudy Khairull was adjudged to have handled the ball outside the box on a goal kick. Mike Ott rolled the ball to Manny Ott’s path the midfielders attempt from the edge of the box sailed over the crossbar. 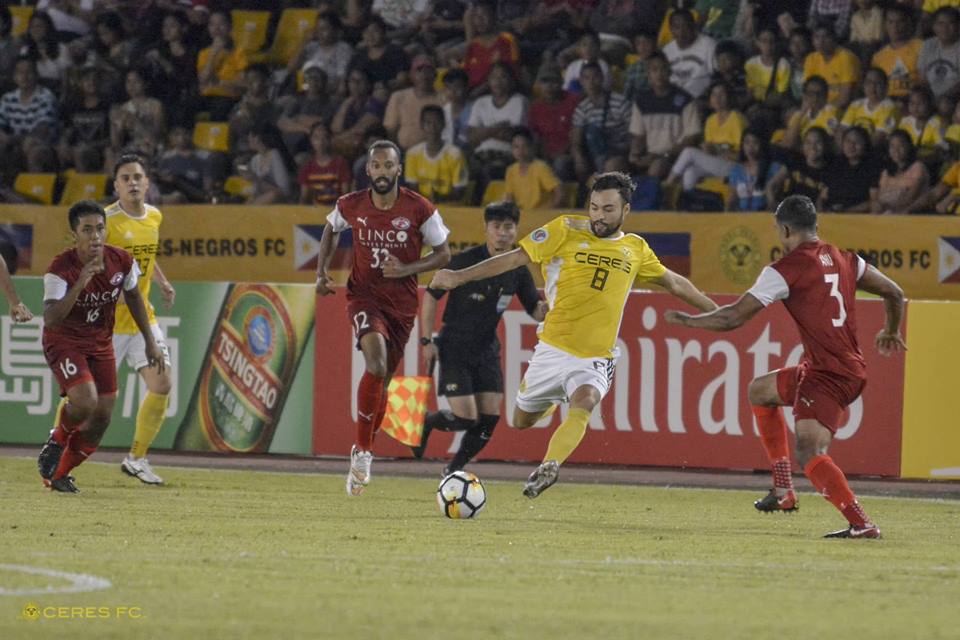 With the need to score, Risto Vidakovic introduced Jeffrey Christaens and Curt Dizon at halftime to add some speed into the Ceres attack.

The busmen had good attempt in the 50th minute from a set piece when Super Herrera tapped a free ball towards goal but Izzdin was in the right place to deflect the chance to safety.

Ceres-Negros pushed to unlock the United defense midway into the second half but the home squad were frustrated by the visitors as they could not connect well in the crowded defense.

The Singaporeans had a great chance to get ahead in the 66th minute when Shahril Ishak broke free of a defender but his shot from the edge of the box was palmed wide by Toni Doblas.

Stephan Schrock was introduced in the final fifteen minutes of the match with the intention to unspool the Home defense. Ceres pushed for a go ahead goal with the ace playmaker leading the charge.

The busmen were aggressive, creating plenty of chances in the remaining minutes of regulation to the delight of the home fans. Schrock had his own attempt in injury time but his shot was collected well by the keeper. 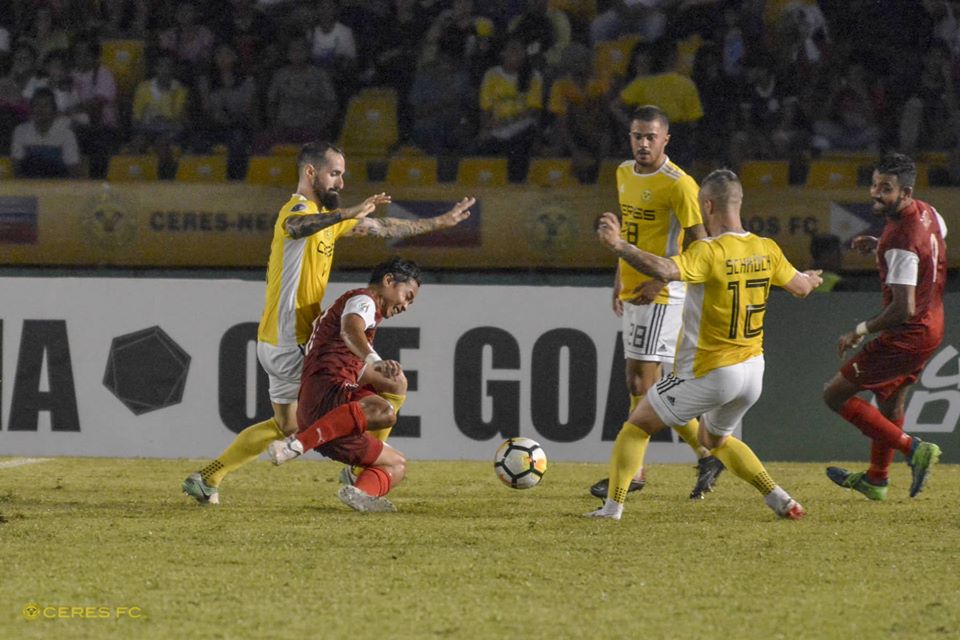 Ceres-Negros had an opportunity to claim the lead before the final whistle with Patrick Reichelts hail mary cross across the face of goal but none of his teammates connected with United securing the ball after for the 1-1 draw.

“They played defensively so it was not easy to penetrate,’ said Coach Risto Vidakovic. “There was no space to play. Maybe we should play more faster but its not easy to do so. I think we did what we can at this moment and we have another 90 minutes there so everything is open.”

“We need to win there (in Singapore) and I think it will similar to this one. I’m expecting that and I hope we recover all the players that didn’t play today and we will be stronger,” Vidakovic added.

Blake Powell was named man of the match with his contribution to the match.  “I’m happy to get my first goal in the AFC Cup but you know I would have traded it back for a win here tonight,” said the Aussie striker.

“Its unlucky that we couldn’t get a result in front of our fantastic home crow but as coach said, we got a must win game coming up so we’ll go to Singapore and give our two-hundred percent,” he added.

Ceres-Negros travels to the city-state next week to play the second leg on August 8 at the Jalan Besar Stadium.