Ceres-Negros FC fell to a 0-2 defeat against Singapore’s Home United last April 25 at the Panaad Stadium in Bacolod City. Late goals from Izzdin Shafiq and Song Ui-Yong propelled the Protectors to the top of Group F.

The result was a surprise for the Negros squad as they dominated possession in the entirety of the match. Omid Nazari tested the keeper in the 5th minute with a strike from the edge of the box but Rudy Khairullah was equal to the effort.

The midfielder had the best chance in the half with a free kick but the ball bounced off the crossbar. Bienvenido Maranon tried to rebound but the ball went high. The 13th minute saw a perfect lay-off from OJ Porteria towards Stephan Schrock but the attempt was off target.

Schrock would have another chance in the 31st minute after a good combination with Maranon. Rudy however made a fine foot save to maintain the scoreline. 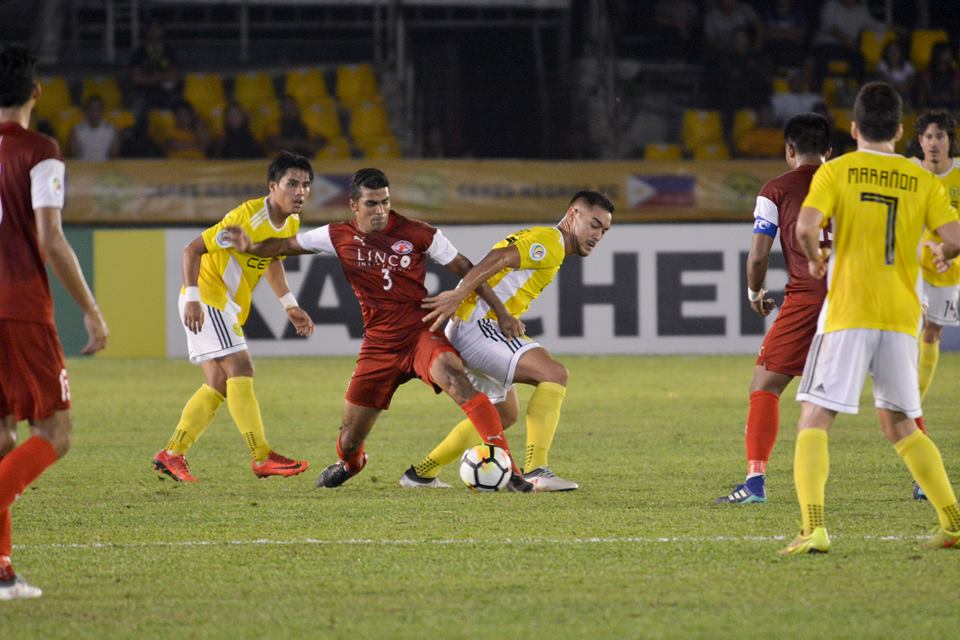 Home United, who was on the defensive backfoot for the whole half, had a their best chance in injury time when Hafiz Nor tried to take advantage of a loose ball that went past the back line but his attempt was a yard out  after seeing Toni Doblas rushing out for the block.

Ceres-Negros had another good chance in the second half Maranon but his header off a Schrock free kick was just over the bar in the 53rd. Minutes later, Maranon had another try inside the box but the keeper made a fine save.

A cross from Jeffrey Christaens in the 66th minute fell into Maranon but the Spaniard couldn’t hit the target. Ceres-Negros would eventually pay for missed chances when Izzdin Shafiq’s free kick found its way to the back of the net in the 80th minute.

The home squad had the best chance to equalize when substitute Martin Steuble rifled in a rebound towards the goal. Rudy however made a game changing save to keep the Filipinos at bay.

It was late in injury time when the referee pointed to the spot after a foul in the box. Song stepped in for the penalty and made no mistake to make it 2-0 for the visitors. The final whistle blew giving Home United the win and the top spot in Group F.

Ceres-Negros finished as the best second in the ASEAN Zone after losing the head-to-head tiebreaker. They will face Group G winners Yangon United in the Zonal Semis next month.