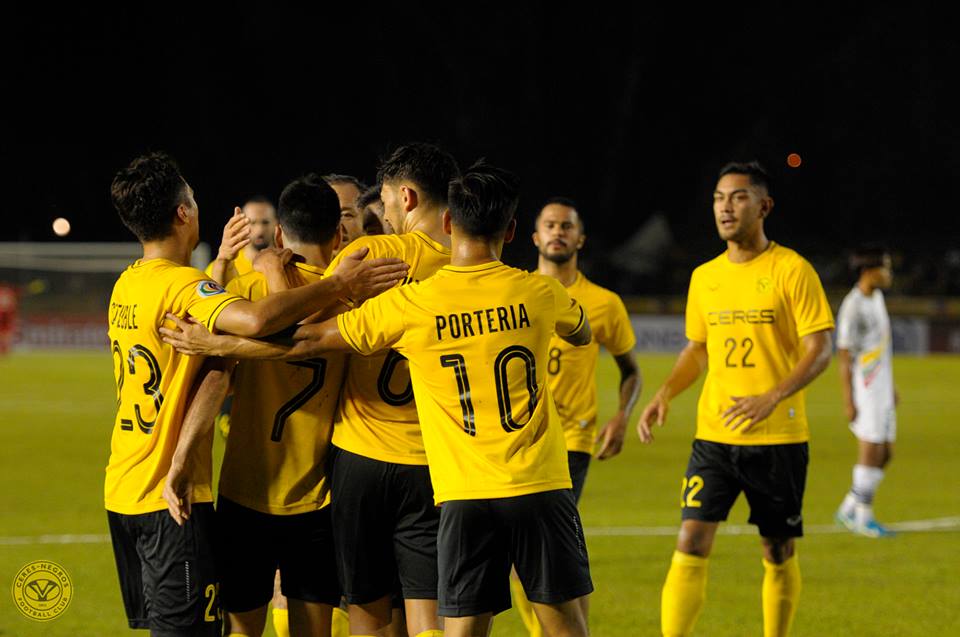 Ceres-Negros barged into the knockout stages of the ASEAN Zonal semis after it dispatched Shan United 5-0 last May 1 at the Thuwanna YTC Stadium in Yangon. Bienvenido Maranon topscored with a hat trick while Carlie De Murga and OJ Porteria added one apiece for the Philippine squad.

The busmen had difficulty to pierce the Shan goal in the first half as a resolute performance from Phone Thitsar Min kept the Filipinos at bay. De Murga came closest in the 26th with a header but it grazed the crossbar and out.

It was in the 38th minute when the Filipinos broke through after Maranon initiated a one-two with Mahir Karic which freed the Spaniard to strike the inside of the post and in for the opening goal.

Mike Ott was fouled inside the box in the 42nd which forced the referee to point to the spot. Maranon stepped in and converted his brace to put Ceres-Negros ahead 2-0 at the break.

Ceres-Negros continued the barrage in the second half but Thitsar Min kept them in contention. Twin shots from Ott were denied as the young goalkeeper maintained the scoreline.

Shan United had a great chance to get a goal back in the 66th but Pyoe Wai’s shot off a breakaway hit the crossbar to the relief of Roland Muller.

The Negros squad went 3-0 up after Maranon shot through the defenders legs and sent the keeper the wrong way. Substitute Kevin Ingreso almost scored from the distance with his first touch but the keeper did well to punch it out.

It was in the 79th minute when De Murga joined the scoring fray. Alvaro Silva head in a corner which went straight to the De Murga who instinctively headed it towards the far post.

OJ Porteria completed the scoring in the 85th minute after he casually passed the ball past the keeper and into the back of the net. United had a golden chance to score with Maicon directing a pass towards goal but De Murga was in the goal line to block the shot before it was finally collected by Muller.

“We are happy for the result and the performance of the boys,” said assistant Coach Ian Treyes who stood in for the suspended Risto Vidakovic. “They were patient and gave their one-hundred percent and now we’re in the (ASEAN Zone) semifinals,” he added.

Ceres-Negros have qualified to ASEAN Zone semifinals for the third straight year and will complete their group stage campaign with a home match against Becamex Binh Duong  on May 15.