Ceres-Negros earned a hardfought victory after they beat Persija Jakarta 1-0 last April 3 at the Panaad Stadium in Bacolod City. Bienvenido Maranon scored the lone goal while Stephan Schrock was the Man of the Match.

It was good start for the home squad who almost took the lead after two minutes when Mike Ott laid off to Maranon in front of goal but the Spaniard’s touch lifted the ball over the crossbar.

The busmen got their well deserved goal when Martin Steuble floated the ball to Maranon who beat the the offside trap and managed to squeeze a header to the far post to make it 1-0.

Persija fought back in the 18th minute with Ismed Sofyan’s free kick but Roland Muller did well to tap the ball to safety. The Ceres-Negros keeper was forced to action again minutes later as he rushed out to clear a ball from a Bruno Matos run. 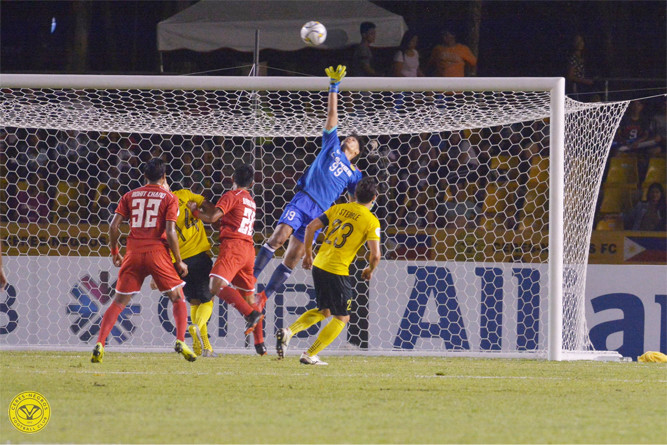 Kevin Ingreso teed up OJ Porteria in the 28th minute mark but the winger mishit his attempt which was easily collected by Andritany. Consecutive chances from Maranon and Carlie De Murga threatened the Persija goal but both missed their mark.

Matos was again dangerous on two dangerous opportunities but the Ceres backline did well to block the Brazilian’s attempt. They were however almost caught flat footed when Lestaluhu’s cross found Bambang Pamungkas but the legendary striker’s attempt from point blank range was a yard off target. The half finished with hosts leading by a solitary goal.

Ceres-Negros started the half the same way as the first with a flurry of chances in the opening minutes. A long distance strike from Porteria was tamed by the keeper while Ingreso’s shot from the top of the box hit the woodwork in the 50th minute.

Muller was again forced to rush out minutes later but is beaten by Matos whose attempt was blocked by a defender for a corner. The resulting kick was headed in by Rohit Chand but it doesnt bother the Ceres keeper.

The visitors were in the ascendancy in the middle of the second half but the Ceres defense does well to prevent any serious attempts in the final third. Persija had a chance in the 65th from Bambang but his towering header was way over the target.

Substitute Sandi Sute had a great chance to score on his first touch but the defense does well again to clear the danger. Mahir Karic was brought in the 69th minute to add another dimension in the Ceres attack.

Stephan Schrock, who has been creating the entire match from the middle, had a long try from 25 yards which forced Andritany to a brilliant save. Ott almost found Porteria alone a minute later but the ball only passed the face of goal.

Ceres-Negros pushed for a closer in the final minutes pushing the game to an exciting climax. Schrock shimmied on the flanks to beat his defender but his final shot goes straight to the opposing keeper. Omid Nazari’s tried from distance in the 84th but his attempt was over.

The home squad had the best chance in the final minutes with Karic beating the offside trap from way out. The Bosnian striker sprinted all the way to the box but left the ball to Ott who was behind him. The winger tried to fake his defender and shoot but his attempt was blocked.

“I’m very proud of the work of the players,” said Ceres-Negros Coach Risto Vidakovic. “They gave everything and I want to say thank you to everybody because they fought and got a result in the game.”

The win kept the busmen to solo first with nine points followed by Becamex and Persija with four points apiece. The Philippine champions will travel to Indonesia in Matchday 4 where they will face Persija Jakarta on April 23 at the historic Gelora Bung Karno Stadium.